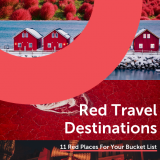 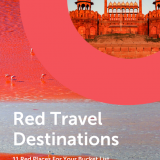 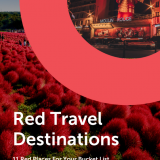 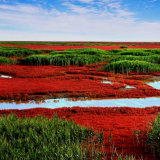 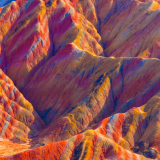 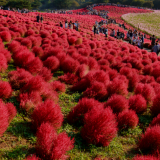 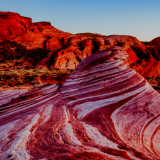 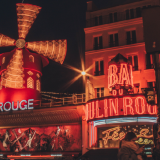 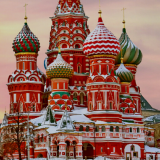 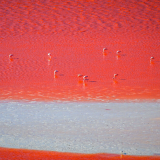 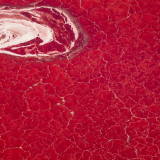 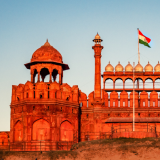 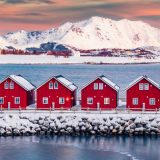 Ah, the rich color of red. Often associated with love and romance (or anger for a stark contrast!), this hue is undeniably bold and assertive regardless of what it denotes. But when it comes to traveling the world, the color red offers an entirely different experience. Cherry-colored lakes and ornate temples drenched in scarlet are just the tip of the flame when it comes to this bucket list of colorful places. It turns out that “seeing red” is anything but negative when looking at these awe-inspiring destinations. Try these 11 red places on for size:

There’s nothing quite like a mineral-rich soda lake on a hot day, eh? Despite sounding totally drinkable, Lake Natron’s wow-worthy rosy waters are best experienced with the eyes (and from a bird’s eye view!). Nearby, you’ll find waterfalls and flamingos, since they happen to have made the area their breeding ground. To make things even more interesting: The lake is nestled at the base of Ol Doinyo Lengai — an active volcano in Tanzania’s Rift Valley. What I’m trying to say is, it’s hardcore as hell.

If you took a regular beach, put it in the upside down from Stranger Things, but then subtracted all of the scary stuff — I imagine it would look like this. Without any sand or blue waters, it’s a bit confusing as to why Panjin Red Beach has the name it does. Either way, this wetland and reed march is the world’s largest and provides stunning sights thanks to the Sueda plants that turn it a vibrant shade of red in autumn.

This reddish-brown palace fort is replete with impressive archways, minarets that extend into the sky, and enough rich history to make it feel like a museum. As the main residence of the Mughal Emperors back in the 1600s, Red Fort is a fascinating piece of the past in the center of bustling Delhi. It took 8 years, 10 months, and 25 days to build — which explains why it’s so grand. I have to hand it to them; I really like what they did with the place.

“Is this one a reach?” I asked myself as I scrawled it down on this list. No, it’s not; I later decided. Possibly the most puzzling on the list and definitely the messiest, La Tomatina Festival is Spain’s favorite way of having a food fight. This festival in Valencia is pretty simple: It’s a massive tomato-fueled extravaganza purely for the sake of entertainment. A glimpse at the photos and videos from past events shows just how riotous it gets, presumably leading folks to take a break from the red fruit afterwards.

While it may look like a terrifying crime scene upon first glance, Bolivia’s Laguna Colorada is a shallow salt lake with a strikingly red color due to algae. It’s absolutely the opposite of what we’ve grown up thinking about lakes — and that’s exactly what makes it so damn cool. Not only is it enticing in its unique saturation, it’s also teeming with pink flamingos. Of course, right? It truly looks like a trippy Salvador Dali painting.

In Japan’s Ibaraki Prefecture, anything is possible. And by “anything” I mean a beautiful public park filled with precisely 32,000 bright red pom pom-like plants known as Kochia. Depending on the time of the year you visit, they’ll either be blue or red, making it one of the most vibrant and colorful places in the world. The candy-colored landscape even holds a festival known as the Kochia Carnival, celebrating the new hues for the fall season.

Thanks to ever-changing sand dunes from 150 million years ago, we now have the Valley of Fire: a swirly landscape of orangey-red Aztec sandstone formations just 150 miles from Grand Canyon National Park. If soft-serve ice cream could become petrified, this is most definitely what it would look like. It’s also a super short drive south from Las Vegas, so you can try your luck on a slot machine and drown your woes in natural beauty when you inevitably lose a bunch of cash!

A cherry-red windmill marks the territory of Moulin Rouge: France’s world famous cabaret that dates back to 1889. Years of can-can dancing, champagne-fueled gatherings, and musical dance entertainment has drawn visitors from around the globe. These red walls and moody lowlights are smooth as can be — making you wish you could experience it back in the early days, too.

Although it’s the most prominent color, China’s Zhangye National Park contains much more than red alone. Countless hues are strewn about, none of which you’d imagine would be on your average mountain. This puzzling sight in the Guangdong province is a result of deposits of sandstone coupled with other minerals, resulting in a kaleidoscope of colors. It looks like someone went wild with a paintbrush.

Waaay up on the northwestern coast of Norway lies Lofoten: An archipelago of dramatically sloping mountains, shimmering dark blue waters, and the cutest little red cabins. These seaside wooden huts are traditional to the area, and there are plenty that you can stay in during a visit. They’re cozy as can be, and the all-red exterior makes for an excellent contrast with the landscape.

Welcome to Moscow! The beautiful and historic Red Square marks the intersection of the Kremlin (the executive branch of the government), the former royal citadel, and the president of Russia’s official residence. Oh-so intricate architecture makes it a massive-scaled work of art. P.S. I may or may not have Googled “do people actually drink Moscow mules in Moscow” while writing this. Spoiler alert: They do not; the cocktail was invented in Connecticut. The more you know.

Dig this list of colorful red places? Don’t worry, there’s plenty more where that came from. Scroll through our list of sherbet orange places, mellow yellow places, verdant green places, cool blue places, plum purple places, and pretty in pink places around the world. When you see a spot you like, click “Save to List” to add it to your Seeker bucket list.

8 Purple Places You Need to Add to Your Bucket List