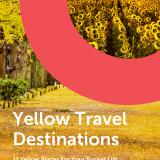 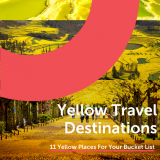 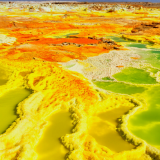 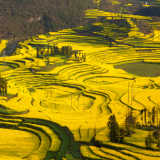 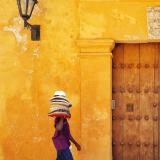 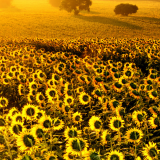 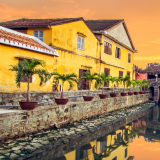 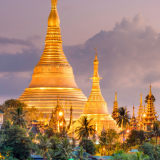 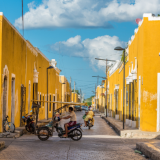 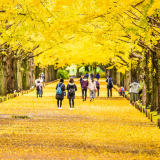 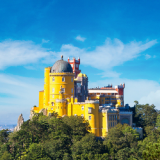 Singer-songwriter Donovan knew exactly what he was talking about when he wrote that song “Mellow Yellow.” This color is an absolute mood booster. And when the sun shines, these locations brighten up our days even more than usual. So grab a banana for the road (to match your surroundings, duh) and explore 9 of the most unusual yellow places around the globe:

9 Extraordinary Yellow Places in the World

The Danakil Depression in Dallol, Ethiopia

There’s nothing mild about the Danakil Depression. The color, the temperatures, the surrounding landscape — it’s all hardcore. It all started with the divergence of three tectonic plates, and now we’re here, looking at one of the craziest yellow places on Earth. Earning the title of one of the world’s harshest landscapes, this unique place clocks in an average yearly temperature of 94 degrees fahrenheit. In between breaks of wiping sweat off your forehead, you’ll be able to enjoy the views of colorful hydrothermal pools and otherworldly-looking salt lakes.

When spring rolls around in Luoping, an untouched destination in China’s eastern Yunnan province, onlookers are in for a serious treat. It turns out the golden seed of canola results in bright flowering blooms when winter ends, and that happens to be the plant that covers this landscape. The result is mind-boggling, bringing about a vibrant blanket of yellow that seems to go on endlessly. With darker colored mountains jutting out of that colorful blanket, it looks like a scene from a bizarre, hyperreal cartoon more than anything else. Folks, this is one of the very best things to do in China.

With historic lemon yellow walls, spicy empanada vendors and high energy street rap battles— you could say things stay lively in Cartagena’s Old Town. Here, you’ll feel transported back in time with old style colonial architecture drenched in shades of gold. Inviting archways and dangling botanical displays add a heaping helping of charm, making you want to walk around the cobblestone streets endlessly (which is exactly how I spent my time there).

Pretend you’re an Instagram influencer and run willy nilly through a field of sunflowers; I didn’t come here to judge. While you wouldn’t expect such a scene in Thailand, the oh-so beautiful Manee Sorn Sunflower Field blooms once a year, turning it into one of the most stunning yellow places in the world. It looks like a movie setting and is surrounded by beautiful Thai countryside, with paddy fields and villages every step of the way. At 2 hours and 45 minutes from Bangkok, it offers an ideal escape from the big city.

Hoi An in Vietnam

Wake up and smell the pho (Vietnamese noodle soup). An intriguing mixture of cultures and architectures present themselves in Hoi An, Vietnam’s famous ancient city. Chinese shophouses, French colonial architecture, and Japanese covered bridges coexist in a one-of-a-kind harmony here, many of them painted a shade of saturated yellow. It’s sort of like Cartagena’s Vietnamese twin, minus the empanadas.

Myanmar’s Shwedagon Pagoda has a few different names. Also known as the Great Dagon Pagoda and the Golden Pagoda, this all-gold Buddhist pagoda is regarded as the most sacred in the country. Opulence is an understatement when it comes to describing its design, with a crown adorned by precisely 5,448 diamonds and 2,317 rubies (!!). And yes, to top that off — the entire structure is covered in real gold. Since it was constructed nearly 2,600 years ago, this famous yellow place also holds the title for being one of the oldest pagodas in the world.

Welcome to Yucatán, where the walls are banana-like in color and the sun shines to match. Izamal has earned the nickname of La Ciudad Amarilla, which translates to the yellow city. Golden-yellow walls line the streets on every building, yet the reasoning behind the color remains unstated. It’s one of Mexico’s Pueblos Mágicos (Magical Towns), AKA a destination with special cultural history. Mayan archaeological sites are found nearby, including plenty of pyramids and monuments, making Izamal one of the best places to visit in Mexico. The local eats around town are pretty damn special, too.

In the middle of bustling Tokyo lies Ginko Avenue: a scenic yellow place that sounds more like a department store for middle aged women than a natural attraction, in my humble opinion. Nevertheless, this shady walkway is noteworthy for its 300-meters of bright yellow ginkgo trees. When fall descends upon Japan, they transform into a canopy of eye-popping color, drawing folks from all over the place to come and take a gander. Bring your cozy sweater; this totally free activity in Tokyo is an autumn lover’s dream.

To hell with the yellow brick road; yellow brick castles perched on Portuguese cliffs are where it’s really at. Pena Palace might not be entirely made of bricks, but it is a deep shade of yellow for the most part. That wide spanning pop of gold is accompanied by a few sections of bright red and blue, making this 19th century Romanticist castle quite the sight to behold. It draws plenty of tourists per year thanks to its close proximity to Lisbon — yet feels much farther from the city’s bustling energy. Not to mention, the surrounding town of Sintra is an absolute gem that is worth exploring by foot.

Like this list of mellow yellow places? Don’t worry, there’s plenty more where that came from. Scroll through our list of robust red places, sherbert orange places, verdant green places, cool blue places, plum purple places, and pretty in pink places around the world. When you see a spot you like, click “Save to List” to add it to your bucket list.

Danakil Depression: 5 Reasons to Visit the Hottest Place on Earth

29 of the Best Things To Do in Colombia