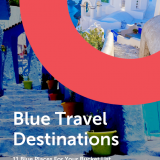 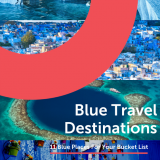 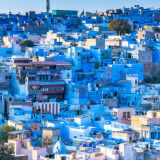 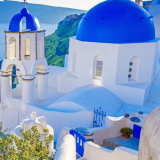 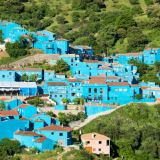 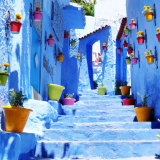 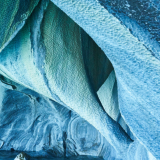 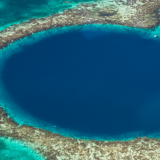 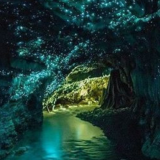 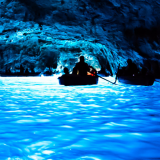 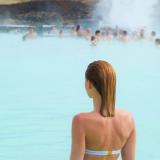 We promise you won’t get the blues from any of these blue places. But you will have to endure a few cheesy puns… sorry not sorry. Blue villages, blue caves, blue sinkholes that look like they’re straight out of the movie Jaws — our world is teeming with sapphire splendor, and the ocean is just the very beginning. Take a gander at these 9 blue travel destinations, from Iceland to India, and tack ‘em onto your wishlist.

9 Beautiful Blue Places Around the World

Known as Spain’s “home of the Smurfs,” Júzcar feels like a child’s bizarre fever dream born into reality. This small village is drenched in blue and nothing else, situated in the province of Malaga, about 6 hours south of Madrid by car. As much as we’d like to believe it was fate that made this place all-blue, it was actually a publicity stunt from Sony Pictures promoting the Spanish premiere of The Smurfs 3D. Either way, it looks totally rad. You can probably count the number of streets on both of your hands, but you’ll never be able to comprehend how many cans of blue paint it took to make this place what it is.

The Marble Caves in Chile

If you can imagine a soft-serve cone of swirly blueberry ice cream, that’s kind of what Chile’s Marble Caves look like. Putting other caves to shame, this mind-boggling cave system is the result of calcium carbonate formations that are both wacky in shape and downright delightful in color. The cave’s cobalt walls look like a purposefully-designed mural against the waters below, giving it a real whimsical atmosphere, and making it one of the most unique blue places in this list. Even though we’d love to take a swim here, the water’s actually pretty freezing, so it’s off limits. You can easily hop on a kayak or boat tour to see all of the glory.

Family-owned leather shops and brightly colored ceramics line the cerulean streets of Chefchaouen: Morocco’s aptly-named “blue city.” Some say the blue is meant to symbolize the sky; others say it was a drive to bring more tourists. The jury’s out on that one, but either way, everyone can agree this place is pretty much what dreams are made of. These tiny, labyrinth-like streets will have you lost in no time — Google Maps doesn’t stand a chance — but hey, you’ll probably find something even better after the 18th time you realize you walked in a circle.

Listen, we thought Chefchaoen was the world’s biggest all-blue city, until we laid our eyes on ever-so sprawling Jodhpur…and said holy sh*t. Topping the charts as the second biggest city in Rajasthan, this sea of indigo and lapis is pretty freakin’ awe-inspiring. It’s a mighty contrast seeing as it sits right next to India’s Thar Desert, a landscape of swirly sand dunes that are anything but the color blue. Busy bazaars, opulent palaces, and oodles of tantalizing curries are just a few highlights here.

Lights out for this one. Unlike the others on the list, the beauty of New Zealand’s Waipu Cave is made possible entirely by glow worms — or as we like to call ‘em, bioluminescent badasses. The cave has a totally different vibe if you shine a flashlight, and you’ll only experience a twinkling canopy of teal-blue light when it’s pitch dark. It’s definitely not for anyone who experiences claustrophobia, with some smaller caverns and boat rides… but it’s well worth a visit.

One of the best things to do in Iceland, you’ve probably seen this destination at least a few times on the ‘gram. It’s the Blue Lagoon, and boy, it sure is what nordic dreams are made of. Like a combination of some outer space experience and a 5-star spa, this geothermal hot spring is a seriously wondrous place. You can sip on champagne right in the balmy waters while covering your face with a silica mud mask — which looks absolutely hilarious (especially when everyone around you is doing it too). Since it’s smack dab in the middle of a lava field, the surrounding volcanic rocks make for a awe-inspiring “where the heck am I?” type of feeling.

The name is ominous to say the least, and a view from above will have you shuddering at the thought of what lies at the bottom. This absolutely giant marine sinkhole is 318 meters wide with a depth of 124 meters, with waters that transform from aqua to deep navy in the center. Sitting roughly 100 kilometers from the coast of Belize, it’s a super popular dive spot for those who aren’t afraid of taking a bit of a plunge into the ocean’s depths.

The Blue Grotto in Italy

If there was an Olympics for the World’s Most Ridiculously Blue Waters, Italy would steal the show with the Blue Grotto and bring home the victory. Sunlight pokes through an underwater cavity in this sea cave, illuminating the blue waters from below, which casts a glowy blue color throughout the entire area. It’s a little bit like being in a fancy resort pool at night, except you’re off the coast of Capri (which also happens to make our list of one of the best things to do in Italy!) and surrounded by towering rock formations. 10/10 recommend pairing it with a heaping pile of pomodoro pasta dusted in parmesan afterwards.

Souvlaki! Tzatziki sauce! Cliffside homes with sky blue rooftops! When we say Santorini, you’re likely to get that picture-perfect image in your head (perhaps due to the Sisterhood of the Traveling Pants). We can’t say you’ll get away from the tourists here, but it’s 100% worth it to see one of Greece’s most sought-after islands. Here you’ll have views of the deep lapis-colored sea wherever you go, whether that’s from the back of a bumpy ATV ride or a swanky honeymoon suite.

Like this list of cool blue places? Don’t worry, there’s plenty more where that came from. Scroll through our list of robust red places, sherbert orange places, mellow yellow places, verdant green places, plum purple places, and pretty in pink places around the world. When you see a spot you like, click “Save to List” to add it to your bucket list.