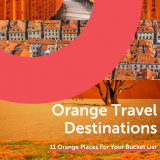 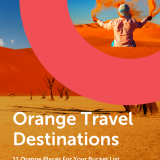 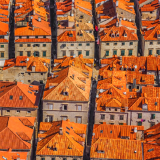 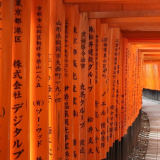 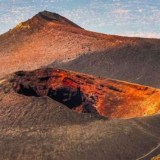 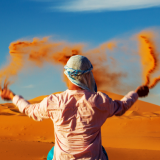 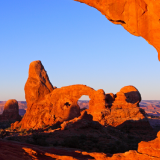 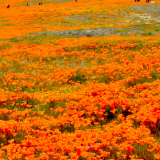 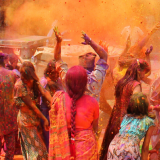 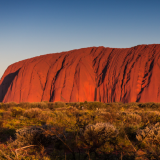 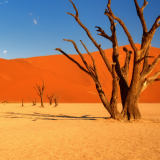 Dreamsicle-colored deserts (not desserts, for once) cover our planet…and they’re not the only show-stopping orange places around the globe. Orange festivals, orange cities, orange monuments —whether you prefer to sweat your way through arid ginger-scapes or dance through a valley of delicate flowers, you’ll have ample opportunity for both. Check out these 11 orange travel destinations around the world and add ‘em to your bucket list:

11 Gorgeous Orange Places in the World

As the gateway to the mighty Sahara Desert, the small village of Merzouga draws a considerable amount of attention from travelers in Morocco. It’s home to Erg Chebbi — a particular sprawl of sand dunes that lies near the Algerian border. These undulating mountains of sand are rich in color, attracting both migratory birds and also camel-riding adventurers who are keen to try out the desert life for a day or two. This is one of the only places on Earth where you can find orange sand, and it’s a monumental sight.

A fiery-orange tunnel of gates greets you at Fushimi Inari Shrine, one of Japan’s more popular destinations (and now photo ops, since the age of Instagram) located in the city of Kyoto. Hundreds of gates line a pathway that winds up the mountain, creating a stunning canopy of color you can walk right through. Since there’s no admissions fee, it’s the perfect stop for those looking for budget-friendly things to do in Japan.

Arches National Park in Utah, US

Few places in the world can match the whimsical pull of Arches National Park. This natural feat is chock-full of precarious-looking rock arches that are the shade of autumn pumpkins, and they’re a sight to behold. Highlights such as Delicate Arch and Balanced Rock steal the show here, but with over 2,000 naturally formed arches, you’ll end up with way more than you bargained for experience-wise.

Hyped up Game of Thrones fans and regular ole travelers will take delight in Dubrovnik regardless of what they’re after. Being a city full of carrot-hued rooftops, it makes for quite the sight when taken in from above. Not only does it take credit for a large portion of GOT’s magnificent scenery — the walled Old Town area is known for stellar seafood in charming eateries, medieval history, and wow-worthy views of the Adriatic Sea.

There’s pretty much one rule when it comes to King’s Day in Amsterdam: wear orange. This might be the world’s rowdiest birthday bash, beginning way back in 1891 on Queen Wilhelmina’s special day. Since then, it’s safe to say it has wholly transformed. In recent years it has drawn anywhere from 600,000 to upwards of 1 million partygoers, so get ready for one hell of a hangover if you choose to join in.

Although you certainly wouldn’t want to be anywhere near it to experience the height of its orangey-red color, Mt. Etna still makes our list for being pretty freakin’ badass. One of the best things to do in Sicily, this active stratovolcano is the highest in Europe. For the past 500,000 years, it has soared above the city of Catania. The mountain is no stranger to lava flows, but luckily, they’ve always cooled down and solidified before getting a chance to reach civilization.

Australia’s most iconic rock formation is more than intriguing to the eye. It has rich history as a longstanding part of Aboriginal culture, considered sacred to the Anangu people. This absolutely massive sandstone monolith stands alone in the middle of the Australian outback, tucked into Uluru-Kata Tjuta National Park, where the stargazing is otherworldly. You’ll feel a million miles from civilization.

“Why have a mere bouquet of poppies when you could have a gigantic, sprawling field full of ‘em?” — whoever decided to create Antelope Valley Poppy Reserve, I presume. Take California’s official state flower (the poppy) and put it on steroids: That’s what you’ll get here. It’s a treat to the eyes with plenty of orange-clad soft slopes, and it’s only an hour and a half outside of downtown Los Angeles.

The name Deadvlei means “dead marsh,” which sounds ominous enough and looks even more so. Remnants of trees jut from the ground with sun-soaked branches, starkly contrasting the bright orange backdrop of desert dunes. The ground surrounding these tree skeletons is a dried up white clay pan, adding another layer of uniqueness to this already mind-boggling sight.

Oh-so energetic Holi Festival could easily be categorized as any shade of our travel rainbow, but we happen to think orange looks extra fabulous. India’s festival of colors has been celebrated for centuries, signifying the victory of good over evil. It’s a day filled with happiness, love, and some of the best energy around — just make sure you’re down to get completely saturated with powdery dye. Don’t worry; it’s highly worth it.

You can call it another desert, but we prefer “Mars on Earth.” Wadi Rum desert is one of Jordan’s most notable destinations for travelers, and one of the coolest orange places on Earth. Here, you can try out glamping if you’re feeling fancy — or a more traditional Bedouin desert camp if you want an authentic experience. Chill out with some camels or get your adrenaline kicks with some ATV and off-road tours; this fiery desert has you covered on things to do.

Like this list of colorful orange places? Don’t worry, there’s plenty more where that came from. Scroll through our list of robust red places, mellow yellow places, verdant green places, cool blue places, plum purple places, and pretty in pink places around the world. When you see a spot you like, click “Save to List” to add it to your bucket list.

8 Purple Places You Need to Add to Your Bucket List