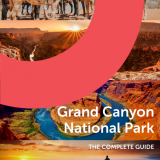 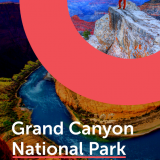 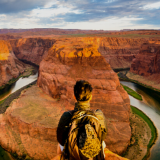 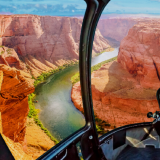 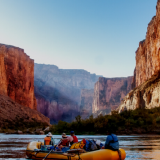 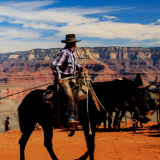 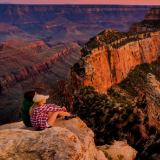 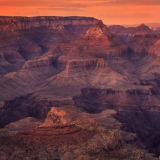 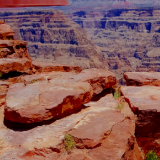 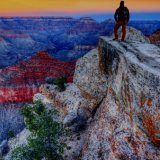 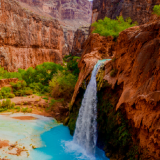 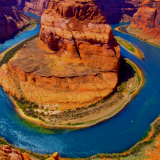 You’ve read about it in books. You’ve seen it in the movies. Offering unique adventures and otherworldly views, Grand Canyon National Park lives up to the hype plus some. This “great wonder of nature” (President Theodore Roosevelt’s words, not mine) is the largest of the three Arizona national parks, open year-round, and welcomes over 5.5 million visitors each year. The park’s public areas—South Rim and North Rim— are separated by that feature that’s hard to miss: a steep-sided canyon carved by the Colorado River. Most guests stick to the South Rim for its stunning viewpoints and epic hikes. Can you blame them when the North Rim feels like the home of Night Walkers?

Where is Grand Canyon National Park?

Grand Canyon National Park lies in the northwestern part of Arizona, about 82 miles and 330 miles north of Flagstaff and Saguaro National Park respectively. To the north of the park is Vermilion Cliffs National Monument while the southern region is bordered by Kaibab National Forest. The park lies close to Arizona’s borders with Utah and Nevada, so accessibility from these contiguous states is easy.

Let’s be clear. Grand Canyon National Park does not encompass the entire Grand Canyon. Most of it, but there’s still plenty left to explore. There’s still some confusion about the age of the Grand Canyon (6 million vs 70 million years old), and human beings started interacting with the park about 12,000 years ago. Today, you can only access one cave in the park, so that leaves about 999 unexplored caves in the canyon. Oh, and while you’re here, be most wary of the rocky squirrel— it’s more dangerous than all other wildlife in the park.

You can visit Grand Canyon National Park anytime, but remember that it’s known for its often-extreme weather conditions. Interestingly, where you are in the park will determine the climate you’ll experience. The busiest period in the South Rim is summer, but spring and fall are also good times to visit as the weather conditions at these times are pleasant. The North Rim is only open between May and October (trust me, you don’t want to be in this part of the park at any other time). Winter is the most difficult for tourists with temperatures plummeting as low as 31°F.

Access to the South Rim in Grand Canyon National Park is provided to all visitors 24 hours a day throughout the year. You’ll be able to enjoy the majority of the visitor services year-round, especially from morning to evening. When the North Rim is open between Mid-May and Mid-October, it’s full-option too. Grand Canyon National Park is under limited operations due to COVID-19. For current status and frequent updates, check out the Grand Canyon’s public health update page.

Guess what? Entry is free on these five days in 2020: January 20, April 18, August 25, September 26, and November 11. If you miss those days, then you’ll have to pay to get in; $20 for an individual permit, $30 for a motorcycle permit, and $35 for a vehicle permit – all valid for seven days. Alternatively, an annual pass that’s valid for twelve months from the date of purchase costs $70 (vehicle and immediate family covered too). Enticing, right? Each permit grants access to the South Rim and North Rim. Digital Entry passes are available at recreation.gov.

Getting to Grand Canyon National Park

Drive, take the train, or fly to Grand Canyon National Park – it’s up to you, really! All three modes of transportation connect to the South Rim, while the North Rim is only accessible by road. A ninety-minute drive from Flagstaff, located about 82 miles south, will bring you to the park. The South Rim is off Interstate 40 either via State Highway 64 or US Highway 89. If you fancy coming in by air, you can fly to the South Rim Airport from Flagstaff, Phoenix, and Las Vegas, Nevada.

Planning a night under the stars? Here are some of the best campgrounds and campsites inside and outside of Grand Canyon National Park:

If camping isn’t your thing, there are plenty of resorts, hotels, hostels, inns, cabins and B&Bs within a quick drive of Grand Canyon National Park. Here are some of our favorites:

“Home away from home” is much more than a saying when it comes to the Airbnb accommodation options offered at and around Grand Canyon National Park. Whether your preference is a camper/van or an entire house with several rooms and amenities, Airbnb meets your desire from within Grand Canyon Village in the park to nearby towns and cities a short drive away. It’s hard to miss the feature amenities like Wi-Fi, pool, and air-conditioning in the area, and South Rim is especially a hotspot for vacation stays in the park.

One way to explore Grand Canyon National Park is to learn about its history, ecology, geology, photography, and a host of other topics while being led by Grand Canyon Conservancy Field Institute instructors. Alternatively, you can take guided bicycle tours, bus tours, mule rides, whole- and half-day whitewater raft trips through wilderness areas, as well as airplane and helicopter tours through the park.

In the Grand Canyon, cliffs are steep and skies are dusty pink. If you’re ready to stretch your legs (but not sure where to start), here’s a list of 10 of our favorite hiking trails in Grand Canyon National Park:

How else would you be able to capture the birds and wildlife that call this national park home, the resplendent flora that decorate its beautiful corridors, and the magnificent landscapes in this amazing space without your camera?!  It’s up to you to choose where you wish to take the shots from, be it on hiking trails, below the rim, or at the base of the canyon. The nearby 4,000-feet high Glass Skywalk is another great place for pictures as you enjoy vantage point views of the park’s glamor while you “walk on air”.

Come prepared to “ride the waves” at Grand Canyon National Park. From single-day adventures to as long as 25-day trips, the Colorado River is home to every kind of breathtaking whitewater rafting river trip that you can imagine. That’s why whitewater rafting is a popular sport here. And before you panic, because you’re a beginner or an amateur, there’s provision for you to enjoy this exciting experience through guided trips. Mind-blowing views await you, rest assured!

Head out to South Rim with your bicycle to begin the extraordinary adventure that takes riders to parts of the National Park not frequented by the average guest. South Rim features over 21 miles of cycling paths which lead to the intricate parts of the rim, some along paved roads, and others on unpaved trails. If you’re looking for something shorter, ride to South Kaibab Trailhead and Yaki Point where the standout features are spectacular canyon views.

More Things to Do in Grand Canyon

National Parks: Every Park in the US By State