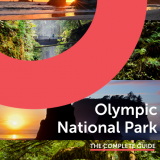 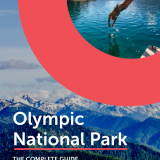 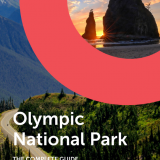 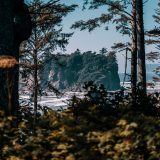 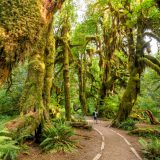 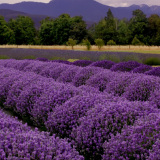 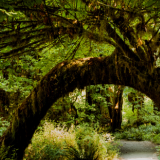 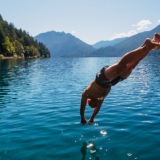 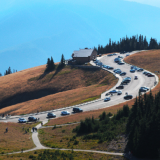 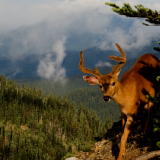 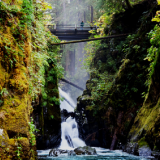 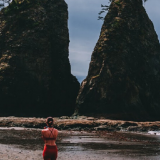 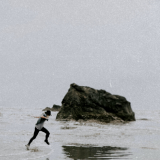 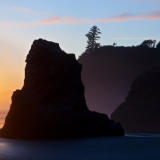 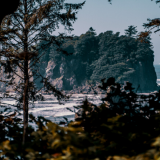 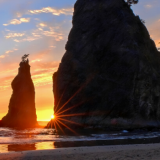 Olympic National Park might just be the closest the United States comes to New Zealand. At Olympic (AKA, the one and only national park in Washington), lofty mountains crash skywards to snow fields while dense rainforests teem with life below. Fueled by a constant supply of precipitation (up to 150 inches per year!), these lands are at once lush and green, misty and snowy. The reserve itself ranges from the coast, where wild, boulder-strewn beaches and bashed by waves, to the soaring Olympic Mountains, peaking at some 7,980 feet.

As you can imagine, all that means plenty to do for the budding adventurer. There are challenging hiking paths that duck under moss-caked redwoods and scramble up to glaciers. There are ski fields with cruisy blues and whizzing black diamond runs. You’ve got kayaking routes, fishing spots, wild camping – oodles. Just be warned that the ONP (as it’s known for short) isn’t the most accessible of parks. It’s really one for those who don’t mind swapping asphalt and tires for boots and mud.

Where is Olympic National Park?

At nearly 1 million acres, Olympic National Park is in the northwestern corner of Washington state. The reserve is cut off from Canada’s national parks on Vancouver Island by the Salish Sea. Olympic National Park is vast, and there are no roads that cross the entire park; it takes 30 minutes to four-plus hours to travel between different points in the park. Located along the Olympic Peninsula, there are three ecosystems in the park: forest, coastal, and mountain, making it possible to see alpine peaks, rain forests, and tidepools all in one trip. U.S. Highway 101, which is one lane in each direction, circumnavigates the Olympic Peninsula and leads to most park destinations, but 95% of the park is wilderness, including 73 miles along the coast.

Olympic National Park is one of the few US preserves where you can range from snowy glaciers to salt-washed coastline in a single day. In fact, thanks to Hurricane Ridge Ski Area, it’s even possible to don the salopettes by morning and hit the waves with your surfboard in tow by afternoon! On top of that, the rainforests here burst with life. We’re talking 16 endemic animal species, 1,200+ native plant species, 300 birds and over 50 mammals. Wowza!

The best time to visit Olympic National Park depends on what you want from your visit. Wildlife lovers should pick the spring. When the thaw starts and the warmer weather finally hits after a harsh winter, you’ll be able to watch the meadows of the subalpine regions of the Olympic Mountains bloom into life. It’s the top time for spotting rare Roosevelt elk and black bears coming out of hibernation.

Later, the hotter, drier months of July and August are prime for backcountry camping and hiking. It’s also the season you’re most likely to catch the Hurricane Ridge Road in action. Winter can be hard and snowy, but there’s some skiing and real isolation to be had if you don’t mind pulling on the thermals.

Officially, there’s never a day you can’t visit Olympic National Park. That said, the main access roads (specifically the Hurricane Ridge Road, the Upper Hoh Road, and North Shore Quinault Road) are most reliably open between May and August. Just remember that everything from heavy snows to sudden rains can close them in just a few hours, so you’ll need to stay abreast of things using the NPS site if you’re planning a jaunt. Stop by the Olympic National Park Visitor Center for information on current weather conditions and hours.

Olympic National Park is under limited operations due to COVID-19. For current status and frequent updates, check out Olympic’s current conditions.

There’s a flat fee of $30 for non-commercial cars entering the ONP, while motorcyclists pay $25 each. Hikers who’ve made their own way here (well done – that’s no small feat!) will be asked for just $15 at the park entrance. Alternatively, you can grab an Olympic annual pass that offers unlimited entries for 365 days for $55 or an America the Beautiful pass for $80 annually and grants you access to all national parks and federal recreational lands in the US.

How to Get to Olympic National Park

Olympic National Park marks the end (or the beginning, depending on which way you’re driving it) of the iconic US-101. It’s a highway that runs the length of the West Coast, all the way from the beaches of SoCal to the wild redwood forests of the Pacific Northwest. Most visitors choose to come in from Aberdeen and run a loop around the reserve. You’ll need about two or three days to do that properly.

Olympic National Park is roughly 4 hours away from two famous Washington national parks: Mount Rainier National Park and North Cascades National Park. Both can easily be reached in a day, and travelers often hit all three while in Washington.

Tours of all shapes and sizes are available to give you a glimpse of this wild corner of the Washington coast. They will last a whole day at least but could last several. Some will focus on the iconic Hoh Rain Forest, to take you through lush hiking paths and great groves of Douglas fir. Others might add in shore walks to the feral ONP coastline, or trips to the Olympic Mountains. It’s also possible to do combo tours that take on Olympic National Park and other regional treats, like Mount Rainier and the Washington Cascades.

Planning a night under the stars? Here are some of the best campgrounds and campsites inside and outside of Olympic National Park:

If camping isn’t your thing, there are plenty of resorts, hotels, hostels, inns, cabins and B&Bs within a quick drive of Olympic National Park. Here are some of our favorites:

Search for Airbnbs along the 101 highway that loops around Olympic National Park. To the north, you’ll catch cozy Washington cabins gazing across the straits to Canada. Towns like Port Angeles and Sekiu have arguably the most choices. As you head south onto the coastal section of the ONP, you can look forward to some seriously remote rental options, including campsites along the Hoh River and log shacks deep in the rainforest.

In misty Olympic, trees are green and hikes are plentiful. If you’re ready to stretch your legs (but not sure where to start), here’s a list of 10 of our favorite hiking trails in Olympic National Park:

Prepare to be lost in a sea of green because 10,000 shades of emerald converge under the canopies of the amazing, immersive Hoh Rain Forest. Straddling the Hoh River on the western flanks of the Olympic Mountains, this is the wettest, lushest quarter of the reserve. There are some seriously dramatic hiking paths that weave over gurgling creeks and through groves of giant trees clad in moss. There’s also an amazing visitor’s center for introductions to local fauna and flora.

Accessible by road and home to the only ski area within Olympic National Park, Hurricane Ridge is a top place to visit both summer and winter. It’s pure drama, set right in the midst of the mighty Olympic Mountains. Trekking paths (some challenging, some easy) weave away from the on-site visitor’s centre, each offering their own jaw-dropping views of the surrounding glaciers and jagged peaks.

Ruby Beach is a perfect showcasing of the sort of wild and wonderful shorelines that extend along the Olympic Peninsula. Set to the sound of crashing waves, it’s got stacks of stone that emerge like giant’s fingers straight from the ocean. Behind, rows of Douglass fir and pine trees sway in the breezes and you can sit and watch the sea mists eerily rising and drifting inland from the pebbles. It’s pretty darn cool.

Things to Do in Olympic National Park and Surrounding Areas

Delve Into the Misty Woods of Hoh Rain Forest

Stoll Through Lavender Fields in Sequim

Take a Dip in Lake Crescent

Wander Through the Hall of Mosses

Learn About Ecology at the Hoh Rain Forest Visitor Center

Visit Where They Filmed Twilight in Forks

What’s the best way to get from Seattle to Olympic National Park?

When is the best season to visit Olympic National Park?

What to expect when visiting Olympic National Park in the winter?

Does Olympic National Park have a visitor center?

What are the best waterfalls near Olympic National Park?

Where is the best RV camping near Olympic National Park?