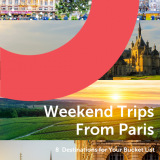 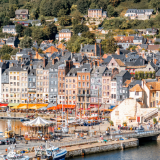 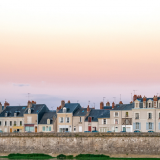 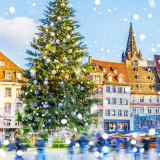 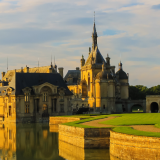 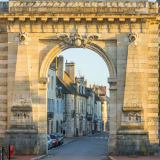 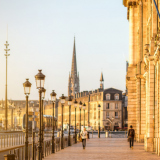 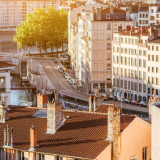 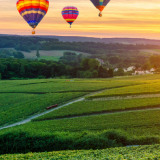 While most visitors arrive to Paris with no intentions of departing for greener pastures or smaller urban scenes, more than a few of the weekend trips on this list might just inspire a change of plans. Some of these destinations include castle hopping amidst rich French history, bicycling through verdant vineyards, sipping on Grand Cru at prestigious champagne houses, and dining on top gastronomy. With France’s high-speed train system making each journey under 3 hours a piece, an idyllic weekend awaits! Pack a bag and prepare to fall more deeply in love with the charm and culture of France while learning a little history along the way.

Less than 30 minutes (or 50 kilometers) from Paris via train, discover the spectacular Château de Chantilly. This princely castle spanning the 14th to 19th centuries remains unchanged from 1886. Another chateau takes up residence on the same grounds, but this one is home to horses. The largest stables in Europe, the Great Stables offer equestrian shows throughout the year, as well as the Horse Museum dedicated to the relationship between man and horse. Stroll the vast gardens of the Château de Chantilly designed in three unique styles, including the French Garden created by André Le Nôtre in the 17th century, the Anglo-Chinese Garden in the 18th century, and the English Garden in the 19th century. Admire the lush landscape from the comfort of your own castle: the five-star Relais & Châteaux property, Auberge du Jeu de Paume. And don’t leave without tasting what the village is known for: Chantilly cream.

Step into the medieval town of Beaune and prepare to become enamored with this treasure trove. Just over 2 hours from Paris via train, you’ll feel immediately transported to another era, antique markets included. Make yourself at home at the historic mansion, Hotel Le Cep, where King Louis XIV once slept, just steps away from the famed Hospices de Beaune. Also known as Hôtel-Dieu, this museum built in the 15th century began as a hospital for the poor. Surrounded by vineyards producing some of France’s most notable wines, Beaune proves the perfect setting in which to enjoy nature’s bounty. For a wine tasting by the glass, Michelin-starred restaurant Loiseau des Vignes is the spot. Or rent a bicycle and head to the wineries themselves. Stop by for a tasting at Fallot, the last independent family mustard mill in Burgundy, another regional specialty.

Ready for a little castle hopping? Just under 2 hours southwest of Paris via train, the charming town of Blois, set on a hilltop along the Loire River, makes for an ideal base from which to explore the Loire Valley. Settle into family-run B&B Le Relais de la Tour, built around a 16th-century watchtower, for your first history lesson. The Chateau de Blois takes reign in the heart of the town, once the preferred residence to 7 kings and 10 queens of France. From April through September, a captivating light and sound show illuminates the regal facades by night. The 19th-century House of Magic, the only magic-themed museum in Europe, is another worthy stop while exploring the old town. Hop on a bicycle for a 25-kilometer riverside ride and you’ll be rewarded with the architectural jewel, Château de Chambord.

One of the most picture-perfect destinations in Normandy, located 185 kilometers northwest of Paris. This charming medieval port town is sure to keep you swooning. Set along the estuary where the Seine river meets the English Channel, Honfleur’s kaleidoscopic Vieux-Bassin, or old harbor, is lined with centuries-old townhouses pretty enough to paint. These scenes were in fact painted by artists including Claude Monet and his native-born mentor, Eugène Boudin, whose noteworthy museum merits a visit. Saint Catherine’s Church nearby, built in the 15th century, stands tall as France’s largest wooden church. Meanwhile, Honfleur’s oldest church, Saint-Etienne, houses the Marine Museum where you can discover the life and times of what is often considered the pearl of Normandy. End your visit with a swim at nearby sandy beach, la Plage du Butin.

Where better to taste France’s golden elixir than the land from which it originates? Just one hour from Paris, hop over to the city of Reims in the heart of the Champagne region and prepare for a royal tasting. Book a tour at the country’s top champagne houses including Ruinart, the oldest Maison de Champagne founded in 1729 and Taittinger, one of the last of the great independent houses. In between bubbles, visit the site where every French King was crowned: 900-year old Reims Cathedral, with stained glass windows designed by artist Marc Chagall. Speaking of art, the Musée des Beaux-Arts, set in a former abbey, houses a number of masterpieces including works by Renoir, Monet, Matisse and 19th-century landscape artist Camille Coroy (re-opening in 2023).

A quick 2-hour train ride from Paris transports you to the capital of France’s Grand Est region, more commonly known as Alsace. With an architectural heritage marked by Franco-Germanic influences, a visit to the city of Strasbourg feels equally exciting and exotic. Known for its cuisine, taste local specialties including choucroute garnie and tarte flambée at one of many eateries in the picturesque Petite France neighborhood. With its medieval half-timbered houses, cobblestone streets, and canals, this quartier resembles a village within a city. The famous astronomical clock within the grand Gothic Cathédrale Notre-Dame comes alive with daily shows, while part way up the 142-meter high spire you can catch views of the Rhine River. Visit during the winter holidays and you’ll discover the Strasbourg Christmas market, one of the oldest and most famous in Europe.

Often called “Petit Paris” for its exceptional 18th-century architecture, Bordeaux is a quick two-hour express train from Paris. Settle into Hotel Le Palais Gallien, named for this once Gallo-Roman neighborhood, and taste the region’s culinary specialties at nearby Le Cromagnon. For an international tasting, head to food hall, Les Halles de Bacalan, and neighboring museum, La Cité du Vin, dedicated to wine, and end with a glass of Premier Grand Cru over stellar views of the city. For a taste of contemporary art, the CAPC musée d’art contemporain de Bordeaux will satisfy. While strolling the boutique-lined historic center, stop by the Grand Théâtre de Bordeaux; you might be right on time for an opera or a ballet.

Your Ultimate Guide to Queer Paris

Best Things to Do in London in Winter

13 Magical Spots For a Winter Vacation in Europe