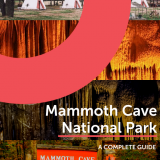 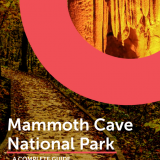 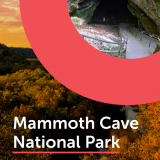 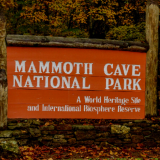 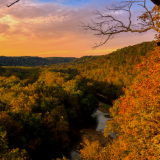 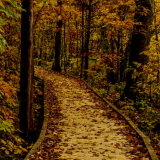 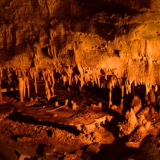 Mammoth Cave —the longest tunnel cave system in the world—formed over 10 million years ago, but it wasn’t designated as an official US national park until July 1, 1941. The cave earned its name for both the size of its massive caverns and its hundreds of miles of explorable passageways. Within the cave’s 412 miles of explored tunnels, visitors can choose from a variety of cave tours (from self-led to twinkling lanterns to wheelchair and kiddo accessible). Above ground, head to Mammoth Cave National Park for hiking, horseback riding, and camping within the park’s more than 52,000 acres of scenic Kentucky landscape. The Green and Nolin Rivers run through the park, giving guests ample opportunities for canoeing, kayaking, boating, and fishing.

Where is Mammoth Cave National Park?

Located on top of the world’s longest known cave system (more than 420 miles of cave passages have been mapped), Mammoth Cave National Park is in south-central Kentucky.

The 53,000-acre park of hills and valleys is located close to Interstate 65. The closest airports are Louisville International Airport (89 miles away) and Nashville International Airport (99 miles away). Public transportation is not an option for reaching the park. Named for the “mammoth” size of its caves, Mammoth Cave National Park is divided by the Green River, which flows east-west through the park’s center. There are no bridges connecting the north and south sides of the park, so visitors can take the Green River Ferry or drive the highways outside the park.

The cave tours and most visitor amenities are on the south side of the river while backcountry camping, hiking, and recreational activities are mostly on the north side of the park.

Thanks to its underground location, Mammoth Cave is only mildly affected by the changing seasons. Temperatures hover around 54°F year-round. Over the years, the  Mammoth Cave has been used as a church, wedding venue, and tuberculosis hospital. Today, Mammoth Cave is the world’s longest known cave system, with much more still to be explored.

Because of its steady year-round temperature, a tour of Mammoth Cave serves as a cool retreat in the summer and a warm welcome in the winter. Of course, most of the activities on the 53,000 acres of land above the park are best enjoyed May through September when Kentucky’s temperatures are best suited for being outdoors. Mammoth Cave’s busiest months are June, July, and August.

The grounds of Mammoth Cave National Park are open 24-hours a day, 365-days a year. The Mammoth Cave visitor center, which serves as the departure point for cave tours, is typically open from 9:00AM to 5:00PM, but from October 26 through March 6 and on holidays, they’re open from 8:30AM to 4:30PM. Most campground reservations and cave tours can be booked online, but in-person assistance is only available during these times.

Mammoth Cave National Park is currently open, including the visitor center, cave tours, outdoor areas, including hiking, biking, and equestrian trails, picnic shelters, and campgrounds, and lodging, concessions, and retail spaces. Mammoth Cave is open 24/7. Due to the COVID-19 pandemic, cave tour operations are continuing to be phased back.

There is no fee to enter the park, but there are fees to tour the caves, which geologists estimate began forming around 10 million years ago. Mammoth Cave is in the Central Time Zone (GMT-5). Visitors coming from the north will cross the boundary from the Eastern Time zone (GMT-4) at the northern Hart County line. For up-to-date information on current conditions, visit these websites for information on roads, campgrounds, trail conditions, weather, ferry status, cave tour schedule, and a calendar of events and programs, including ranger-led programs.

There is no fee to enter Mammoth Cave National Park. Most activities, like hiking and biking, are free. Cave tour prices vary from $6 to $60 for adults. There are five days a year that are designated as “fee-free” days for all U.S. National Parks and Mammoth Cave offers a limited number of free cave tours on those dates.

There are a number of rustic cabins, historic homes, and bed & breakfast Airbnb options available in the Mammoth Cave area. The best way to find something close to the park is to search for “Mammoth Cave” in the location bar and use the map feature to determine each location’s distance from the park (many will also give this information in the description). Cell service near the cave can be spotty, so check the details to ensure the host has wi-fi if that is important for your trip.

No visit to Mammoth Cave National Park is complete without a cave tour. There are more than a dozen tour options, which vary depending on the season, including short and long walking tours, cave crawling tours, and lantern lit tours. Ranger-led cave tours are offered year-round and self-guided tours are offered seasonally. No matter which tour visitors choose, they must purchase a ticket, which costs $6-$60. Purchasing a cave tour ticket in advance is strongly recommended as the tours often sell out.

The Wild Cave Tour is Mammoth’s longest and most strenuous tour, and it’s only recommended for experienced cave explorers. Mammoth Cave also offers an accessible tour that uses an elevator instead of stairs and a kids-only tour for little adventurers. Tour availability is limited and advance reservations are recommended.

If you’re ready to stretch your legs (but not sure where to start), here’s a list of 10 of our favorite hiking trails near Mammoth Cave National Park.

Best Things to Do Near Mammoth Cave

Located just outside of Mammoth Cave National Park, Dinosaur World offers the chance for families to wander among hundreds of life-sized dinosaurs. This world-famous dinosaur attraction is a hands-on experience with interactive exhibits and plenty of outdoor play spots. Dinosaur World is also a dog-friendly attraction for well-behaved, leash-trained pups.

Head to Big Mike’s Rock and Gift Shop (Kentucky’s largest gift shop!) for an out-of-this-world collection of rocks, geodes, crystals, and fossils. If you’re into wacky roadside attractions, you can pose with a giant Mosasaurus, or pay $2 to enter the kooky Mystery House and “experience the unexplainable.”

Kentucky Down Under Adventure Zoo

Kentucky Down Under is an Australia-themed animal park located in Horse Cave, Kentucky. Visitors can try their hand at gem mining, stroll through the open “outback” where kangaroos and emus roam freely, and feed a huge family of Lorikeets.

The Mammoth Cave Railroad played an important role in bringing more tourism to Mammoth Cave during it’s early development. Today, the remaining steam engines tell the story of life in Kentucky over a century ago. While you won’t find any moving train cars, visitors can still travel by foot or bicycle on the rail path as the abandoned line was converted to the Mammoth Cave Bike and Hike Trail in 2004.

Mammoth Cave’s Old Guide’s Cemetery is the burial place of Stephen Bishop: one of the region’s first cave guides. Bishop was a Black American man who spent almost 20 years guiding cave tours of Mammoth Cave, first as an enslaved guide, and then as a free man. Stephen went on to make major discoveries during his time as a guide, and stories of his findings are still told to those who visit today.

Double J Stables and campgrounds offers guided horseback rides along the trails found inside of Mammoth Cave National Park. With exclusive access to over 85 acres of trails in the park, Double J promises an experience found nowhere else.

The Green River Ferry, first developed in 1934, is the final remaining active river ferry in the entire park. The ferry carries vehicles, hikers and bikers across the Green River 364 days a year.

From horseback riding and golfing to zip-lining and go-carting, there’s fun for everyone at Kentucky Action Park. The park is most famous for its riding stables, the Jesse James Riding Stables, where anyone (aged 2 to 92, according to the website!) can enjoy a guided trail ride through cave country where outlaws like Jesse James once roamed.

What’s the weather like in Mammoth Cave National Park?

Does Mammoth Cave National Park have a visitor center?

Do you need reservations to visit Mammoth Cave National Park?

What are the best campgrounds near Mammoth Cave?

What are the best cabins near Mammoth Cave?