Iceland in Winter: Fall In Love With Reykjavik In Total Darkness 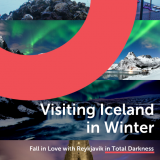 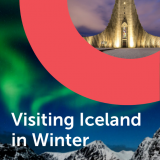 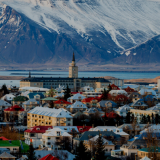 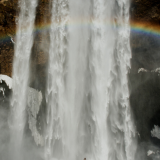 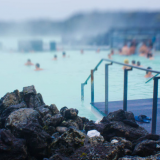 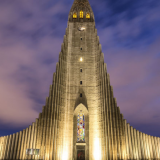 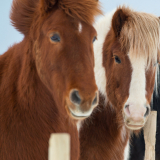 In December, Reykjavik will see just four hours of daylight from when the sun rises around 11am and sets at 3:30pm. During the daylight hours, the sun will rise to a max high of 3-degrees on the horizon, barely peeking out. If you think that visiting Iceland in winter sounds totally crazy, think again! Not only will fewer tourists be buzzing around, but it offers a unique perspective of how Iceland copes with life in the dark. Here are some of the best things to do to in Iceland during those dark winter months.

Get lost in the neighborhoods surrounding downtown Reykjavik

After a breakfast of incredible coffee and skyr, Icelandic yogurt, venture out into the neighborhoods that surround the northernmost capital in the world. The sky will look like midnight when it’s really 10a.m., but this means you get to witness the beautiful light displays on almost every house. It’s like Christmas but all winter long with strands of glowing light illuminating the city. Follow the displays down to the harbor and stop by Harpa, Reykjavik’s award-winning concert hall.

The darkness of Iceland in winter does nothing but intensify the magnificence of this building’s design and lighting. Check the event schedule and, if you’re lucky, you can see the symphony for $15. Enter at 9:30 a.m. in the dark for the open rehearsal and emerge in daylight – the reverse of entering in the early evening and emerging after dark.

No guarantee the symphony will perform the show in its entirety, but the warmth inside, impressive design, architecture, and music are surely worth the small ticket price. When you leave, the sun will have woken up to cast the most beautiful golden-hour light across the entire city.

Eat all of the candy

Icelandic candy has unique flavors and combinations, like licorice covered in chocolate. This is no Hershey’s milk-chocolate bar: it’s all high-quality. Head to any candy shop on Saturday (we love Omnom Chocolate Factory!) and dive that shovel into all the colorful gummies, chocolates, and licorices.

Try everything you can fit into that plastic bag because on Saturday, candy is on sale for half price! It’s also common to drink soda out of a licorice straw in Iceland. This puts it in high contention for “best country in the world” award.

Reykjavik locals know to fend off the cold of Iceland in winter by enjoying geothermal baths, but you won’t catch them heading to the Blue Lagoon. Instead they’re going to the local pools, some of which have both indoor and outdoor pools for warming up or cooling off, depending on what you’re looking for. My visit to Laugardalslaug was idyllic: floating in a geothermal pool with friendly locals as darkness crept overhead and snow began to fall. Entrance to most local pool is under $10, so you can visit six days in a row for the price of one visit to the Blue Lagoon.  Plus now you have some extra krona for a second bag of candy on Saturday.

Warm yourself from the inside out

Iceland’s signature drink is brennivin, literally translated to “burning wine.” Affectionately, it has earned the nickname “black death.” Think strong vodka with a schnapps-like twinge of caraway flavor and down the hatch it goes. It’s a must-try. Head to a distillery like 64° Reykjavik Distillery to enjoy the full experience. Brennivin is meant to be consumed as a shot, followed by a snack of hakarl: fermented shark. If shots aren’t your friend, savor one of the new Icelandic craft beers — a real treat since beer was illegal in Iceland until 1989.

Warm up your brain in local museums

The clothes you packed aren’t keeping you warm enough to endure Iceland in winter? Head to The National Museum of Iceland to try on some of their traditional winter garbs. The museum is conveniently located within walking distance from the downtown area of Reykjavik. It’s a gorgeous building and entirely heated and lit, serving as a haven from the cold and dark walk you took to get there. The museum’s permanent exhibition covers all things heritage and history about Iceland. It’s laid out in chronological order, starting with the ship medieval settlers used to cross the ocean to Iceland. It ends on the top floor in a recreated airport terminal representing Keflavik Airport.

Along the way, you’ll see relics of old weapons, clothes, tools, and houses. Icelandic culture used to think the uvula, the dangly thing in the back of your throat, was a source of infection, so it was frequently removed. On display at the museum is the tool they used to use for the uvula removal procedure. It looks like something you should use to cut your dog’s nails. Don’t forget to try on traditional Icelandic clothing, and then text the pictures to your family. Your mom might respond with something like, “Do you have head lice now?”

For a museum experience like nothing you’ve ever seen before head to The Icelandic Phallological Museum. The museum is home to over 200 members. What’s your favorite animal? It’s probably in the museum. Sixteen whales, one polar bear, five arctic foxes, one dog, and one human specimen – all waiting for gawking eyes of those who enter. The gift shop makes for an authentic Iceland souvenir your friends are sure to appreciate. A nice tote bag, a magnet, or condoms with northern lights scenes are useful presents for anyone on your shopping list.

Swing by Hallgrimskirkja after the museum, the Lutheran church in the city center. Standing at 244-feet, it’s hard to miss. Check out the magnificent interior and make sure God knows you only went to the penis museum for science.

Best Things to Do in London in Winter

Best Winter Vacations For People Who Love the Cold