25 of the Best Things to Do in Hanoi 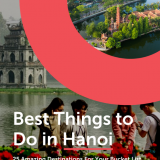 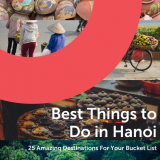 Hanoi lies at the heart of Vietnam’s ancient culture. The bulldozer of the 20th-century made few incursions here. The French districts, with their Indochinese architectural marvels and art moderne villas, evoke a pinch of nostalgia for colonial days (regardless of how we feel about colonialism).

Since the late 1960s and the advent of the doi moi (fiscal renovation policy), Hanoi’s infrastructure has upgraded from the ordinary to the grandiose. Local chefs are whipping up some of the most creative East-meets-West concoctions in the world. Museums showcase the country’s most precious artifacts, covering anthropology, dynastic relics, ethnography, revolutionary history, and fine arts.

You can easily spend a week in this metropolis of seven million people and never eat a drab meal or slip into a dull moment. Let’s explore the top 25 things to do in Hanoi.

Locals say you can’t know Hanoi unless you know Hoan Kiem. Hoan Kiem Lake is a medallion of avocado green water in the city. Along this 25-acre oasis, you’ll find a shady promenade abuzz with peddlers, hustlers, lovers, chess players, and tourists. For the best introduction to Hanoi, take a stroll around this soulful space.

The main attraction at Hoan Kiem Lake is Ngoc Son (Jade Mountain) Temple, on a tiny island at the lake’s northern end. Rising from a mound between its two entrance pillars is the five-story Ink Brush Tower. The pillars are inscribed with the Chinese characters for happiness and fortune.

Water puppetry is a thousand-year-old Vietnamese performance art with deep roots in the wet rice agriculture of the Red River Delta. Carved from fig wood, then painted and lacquered to a high, distinctive sheen, the madcap puppets careen over a watery stage, enacting skits drawn from Vietnam’s treasury of folklore and history.

At Thang Long, Vietnam’s premier venue for the arts, a 45-minute performance skitters through 17 episodes drawn from legends and myths. A traditional orchestra conducts a clamorous soundtrack while cheo (popular opera) singers narrate the dialogue and action.  In nearly every water puppet performance, you’ll meet a poor farmer who brags about his ducks until one is snatched by a fox that runs up a tree. You’re also likely to see boy puppets swimming after frogs and playing flutes from a perch on the back of a water buffalo.

Admire the Architecture of the French Quarter

However you may regard the French colonization of Vietnam, there’s much to admire in the magnificent buildings that survived the occupation. In Hanoi, the French clustered their architectural gems in two districts and on two scales: residential and municipal. Even if you have no sympathy for the mission civilisatrice (civilizing mission), you can’t help but admire the architectural feats of the French as you gaze at these buildings.

Catch Some Zzz’s at the Sofitel Legend Metropole Hotel

The Sofitel Legend Metropole Hotel guests have included Charlie Chaplin, Graham Greene, and Jane Fonda. They all stayed on the second floor of the 1901 colonial building. Note the immaculate white exterior, the iconic pilasters, balustraded balconies, and green shutters, a hallmark of colonial French aesthetics.

Watch a Performance at the Opera House

Turn left on Trang Tien to reach the grande dame of the city’s French architectural legacy: the Opera House. Built between 1902 and 1911, the still-active place is the most opulent of Vietnam’s three French-designed municipal theaters. After the Japanese surrendered in 1945, some 20,000 locals rallied at the Opera House and the Viet Minh seized control of the rally–its boldest demonstration of power to date.

Go Back in Time at the National Museum of History

The National Museum of History is the most powerful French colonial building in Vietnam, a masterpiece of the Indochinese style. The museum’s exhibits, which survey Vietnamese history from 500,000 B.C. to the 1940s, are a worthy complement to the grandeur of the building. The displays continue across the street at 25 Tong Dan. In a building formerly occupied by the Museum of Vietnamese Revolution, exhibits focus on the 20th-century struggle for independence against the French and Americans.

Hoa Lo Prison was known to Americans as the Hanoi Hilton, a grimly ironic moniker coined by American pilots incarcerated here from 1964 to 1973. A high-rise now occupies most of the former prison grounds, but the old jail’s southeast comer was preserved in 1993 as a memorial. In the Death Cell sector, you’ll find one of two guillotines used by the French and a metal barrel used for water torture.

Get Lost in the 36 Streets of the Old Quarter

Hanoi’s bustling Old Quarter is a warren of shops, still bustling 600 years after dozens of guilds claimed different stretches of road to market their wares. Here, life spills from the maws of 19th-century tube houses onto splendidly crowded sidewalks and streets.

Drink in a Bia Hoi Bar

One of the essential things to do in Vietnam is to enjoy a few glasses of draft beer (bia hoi) with friends at a bia hoi bar. These bars are scattered around the country but are especially noticeable in Hanoi. You can easily find these at crowded storefronts where everybody sits on low stools, quaffing locally-made beer, nibbling on tapas-type snacks, and discussing everything under the sun.

St. Joseph’s Cathedral stands at the heart of Hanoi, anchoring the archdiocese’s 480 Catholic churches and chapels and 113 parishes. It serves as a vibrant place of worship for Hanoi’s half-a-million Catholics. The facade is bracketed by two 103-foot towers hung with five bells each. Tall stained-glass windows, pointed arches, and high rib-vaulted ceilings call to mind medieval Europe.

Listed by UNESCO as a World Heritage site in 2010, Hanoi Citadel is now open to the public after hundreds of years as the exclusive domain of Vietnam’s elite. Unlike the Hue Citadel, which remains intact, the 12-acre Hanoi Citadel is a fragmented collection of monuments.

The Perfume Pagoda (Chua Huong) is a complex of 16 halls, temples, and grottoes amid a craggy karst landscape southwest of Hanoi. No other landscape in Vietnam so closely mirrors the world of a Chinese ink painting. Nor is any pagoda as popular. International travelers flock to the site, while domestic pilgrims swarm the pathways and halls during a festival held from the 6th to 15th day of the first lunar month (Jan. or Feb.).

Get Artsy at Handicraft Villages

Villages specializing in a diversity of trades–silk weaving, ceramics, carving, woodcut printing, hatmaking, bronze casting, and others–dot the north of Hanoi. Some craftspeople, especially those closer to Hanoi, would welcome you into their small workrooms and, of course, into their shiny new showrooms.

From the north end of Hoan Kiem Lake, walk up busy Hang Dao where shops that sell clothing, food, and displays spill out onto the sidewalk. From Friday through Sunday from around 7 pm, this street all the way up to Dong Xuan Market is closed to traffic. Explore the vibrant night markets, with stalls set up along the center of the street.

Cau Go Street marks the former site of the little wooden bridge over the Kim Nguu River. The entrance to Cau Go Alley (Wooden Bridge Alley) is a colorful flower market. Walk north along Hang Be and you’ll come to Hang Bac, which has been the center for gold and silver trade for over seven decades. Today, it is mostly crowded with tourist cafes and craft shops.

Make way for the Bon Mua cafe at the southwest corner of Hoan Kiem Lake where you can savor an aromatic, yet mellow cup of Vietnamese coffee. To linger over a coffee under the trees overlooking the lake in the early morning is to watch Hanoi awakening. Boys with footballs bounce by and old ladies in neat rows wave wooden swords in rhythm to a ghetto blaster. A man stretches his legs against one of the trees bordering the lake, a jogger lopes past, and an oldster moves gracefully through the poses of tai chi. It’s all over by half-past seven when offices open.

From Le Thai To Street along the west bank, take a sharp right into Drum Street (Hang Trong). It is a street full of colorful artisan shops selling lacquer, silk, and embroidered linens. It is an excellent place to buy authentic Vietnamese souvenirs without being ripped-off.

Ho Chi Minh Mausoleum is more intimidating than it is grand. Even looking at it from afar, the mausoleum looks imposing. Primarily made up of marble and granite, it has three levels and in front of it are 79 cycad trees that symbolize his 79 years in this world. You’ll also find bamboo ranges on its side and can hear whistling when you listen closely when the wind blows over them. Before entering, wear a modest outfit that should not consist of a pair of shorts, skirts, off-shoulder and tank tops, and hats.

After visiting the mausoleum, you can head on to the nearby Ho Chi Minh Museum to learn more about his life and contributions. Entering the museum you can go up, then head down to learn about Ho Chi Minh in chronological order. Various galleries and exhibits will give you a glimpse of his life. Don’t miss the exhibits on world history starting from the late 19th century.

The most adventurous way to get to Ba Vi National Park is to rent a motorbike. You can stop wherever you want and click photos of breath-taking scenery along the way. Don’t fret about getting lost as you will find direction signs all along the way.

Thuy Ta (Lake Pavilion) cafe, just south of Kinh Nghia Thuc Square, its terrace overhanging the lake, is a delightful spot to linger over a lemonade or a bowl of ice cream. Built by the French just before the outbreak of World War II, it takes little imagination to envision it in the moonlight as a fashionable, romantic dance hall during the last days of French Indo-China.

Situated in the middle of the picturesque West Lake and connected to the mainland by a causeway, it is no wonder why the Tran Quoc Pagoda is one of Hanoi’s most striking attractions. The pagoda consists of six sides that signify the stages in the life of Buddha and consists of eleven floors. Inside the pagoda, you will find various artifacts such as the statue of the Sakyamuni Buddha’s Parinirvana that is red lac with gold trimmings. Ancient steles contain records of the history of the Tran Quoc Pagoda, with the oldest one dating back to 1639.

Find Peace at the Temple of Literature

Established in 1070, the Temple of Literature is locally known as Van Mieu and has long been associated with learning. It’s one of the earliest structures in the city and part of the original city. Emperor Ly Thanh Tong had it built and dedicated it to Confucius. Over the years, the grounds were expanded and new structures were added.

Since being remodeled a few years ago, the Women’s Prison is one of Hanoi’s most interesting museums. Displays include video clips on various aspects of the lives of Vietnamese women, with themes of family, history, and fashion. The ground floor focuses on their role as street vendors, toting goods on bamboo yokes, while the second floor covers their role in the wars of liberation. The third floor shifts the emphasis on family life, and the top floor presents an eye-catching array of costumes worn by the country’s ethnic groups.

31 of the Best Things to Do in Vietnam

Bikepacking Vietnam on a Budget: Our Tell-All Guide

The Best Places to Visit in Vietnam from North to South