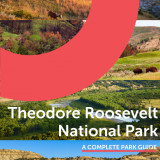 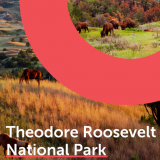 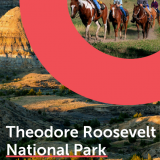 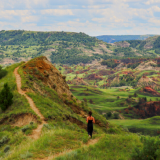 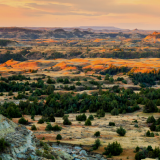 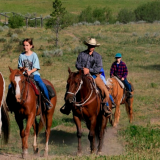 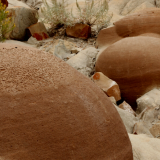 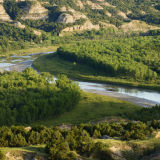 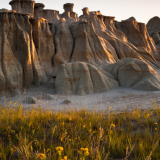 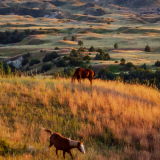 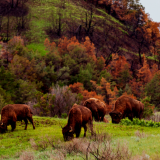 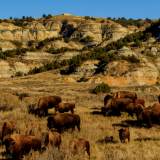 Get in touch with your inner cowperson at Theodore Roosevelt National Park. While some national parks blow your socks off the minute you see them, this vast wilderness in western North Dakota creeps up on you slowly. Its namesake, U.S. President Theodore Roosevelt, referred to the area as “an abode of iron desolation,” which captures the mood of this North Dakota national park pretty well.

Its rugged badlands, herds of wild bison and star-filled night skies will have you feeling like you’re the only living person for miles around—which you very well may be. Theodore Roosevelt National Park is a place to come to if you want to get off the beaten path, preferably on horseback and with a lasso in hand.

Where is Theodore Roosevelt National Park?

Theodore Roosevelt National Park is located in western North Dakota and consists of three sections: the South Unit, North Unit and Elkhorn Ranch. The South Unit is the largest and most popular, with Interstate 94 running along its southern boundary. It’s about a 2-hour drive west of Bismarck, which is the closest city. The North Unit, meanwhile, is accessible by U.S. Route 85, which connects with I-94. Elkhorn Ranch, which is the smallest section of the park, can only be reached by car via a gravel road and has very limited facilities (which is part of its charm!).

Getting to Theodore Roosevelt National Park

Theodore Roosevelt National Park is very remote, which is part of its appeal. The closest city is Bismarck, North Dakota’s small capital city, which is a 2-hour drive to the east. Getting from Bismarck to the South Unit entrance is easy, just take the I-94 West and get off at Medora.

Getting to the North Unit from Bismarck takes about a 3-hour drive. Take the I-94 West and then take U.S. Route 85 North at Belfield. The entrance is on your left just after you cross the Little Missouri River.

Theodore Roosevelt National Park is intimately connected with its namesake, the 26th U.S. President. In 1883, Teddy Roosevelt arrived here, a young, scrawny city boy looking for adventure. The experience helped Roosevelt formulate his personal philosophy of living a “strenuous lifestyle” as well as his lifelong advocacy for protecting America’s public lands. Today, there are plenty of reminders of Roosevelt’s time here, including at the Maltese Cross Cabin and Elkhorn Ranch, both of which he owned.

While Theodore Roosevelt National Park is open year-round, the high season is from June to September, when the weather is warm. Luckily, the park is far from any large cities, so crowds are rarely a problem, even during the summer. However, you should still book your lodging in advance since the few hotels nearby can fill up fast.

While seeing the badlands dusted in snow is magical, winter at Theodore Roosevelt National Park presents challenges. Roads are frequently closed and some (but not all) campgrounds are closed too, especially those with toilets and running water.

Theodore Roosevelt National Park is open 24 hours a day, every day of the year. Keep in mind that while the North Unit is in the Central Time Zone, the South Unit is in Mountain Time. The South Unit Visitor Center is open every day except major holidays, from 8:00 am – 4:30 pm between September and June, with extended hours from June to September.

The Painted Canyon Visitor Center, also in the South Unit, is open May to October, from Tuesday to Saturday. Extended hours are from Memorial Day to Labor Day, and then 8:30 am – 4:00 pm for the rest of the year.

The North Unit Visitor Center is currently housed in a temporary facility after the old visitor center was demolished because of structural failure. Currently, their hours are 8:30 am – 4:00 pm, closed Wednesday and Thursday, but check ahead before visiting because the situation may change.

The park is currently under limited operations due to COVID-19. For recent COVID status and frequent updates, check out Theodore Roosevelt National Park’s current conditions.

The entrance fee for a single, private non-commercial vehicle is $30, which gives you 7 days of access and covers all people in the vehicle. For motorcycles, the fee is $25 for 7 days, while for individuals traveling on foot, horseback or bicycle, it is $15. An annual pass, meanwhile, costs $55 and covers either a single vehicle and all its occupants or the pass holder and immediate family.

If you’re ready to stretch your legs (but not sure where to start), here’s a list of some of our favorite hiking trails in Theodore Roosevelt National Park:

Planning a night under the stars? Here are some of the best campgrounds and campsites inside and outside of Theodore Roosevelt National Park:

If camping isn’t your thing, there are plenty of resorts, hotels, hostels, inns, cabins and B&Bs within a quick drive of Theodore Roosevelt. Here are some of our favorites:

Getting an Airbnb is a great alternative to a hotel or campsite. Your best bets are the towns of Medora and Watford City. Staying in Medora will put you right at the entrance of the South Unit, although because Medora is very small the number of Airbnbs is limited.

Watford City is a bit bigger and has more Airbnb options, but it’s also a 20-minute drive from the North Unit entrance and nearly 1.5 hours to the South Unit entrance. There are also a handful of ranches around the park that are available on Airbnb, if you really want to get the full Teddy Roosevelt experience.

Park Rangers offer guided tours during the summer season, usually beginning in June. There are a number of different types of tours available, including a Theodore Roosevelt-themed tour of the Maltese Cross Cabin and a Geology Talk at the Painted Canyon Overlook. Guided hikes are also available during the summer of varying lengths and difficulty.

Best Things to Do in Theodore Roosevelt National Park

Follow in the Footsteps of Teddy Roosevelt at Elkhorn Ranch

The Elkhorn Ranch was Teddy Roosevelt’s “home ranch” and while only the home’s foundations remain, the landscape that Roosevelt fell in love with is unchanged. You won’t find any facilities or visitor centers here, but you will find vast open spaces and stunning vistas.

Cowboys used to drive cattle north along the Long X Trail through what is now Theodore Roosevelt National Park. You can catch a glimpse of this history by checking out the herd of longhorn steers the park maintains in the North Unit.

Ride a Horse Through the Backcountry

If you really want to feel like a cowboy or cowgirl, then it’s time to get on your horse and roam the wide open prairie. While guided horseback tours are not offered within the park, the backcountry is open to horse riding and there is a horse camp.

Cruise Along the 14 Mile Scenic Drive

The North Unit’s 14 Mile Scenic Drive is a 28-mile out-and-back drive that takes you through the bottom of the badlands before climbing up to the canyon’s rim. There are a couple great viewpoints along the way, including River Bend Outlook and Oxbow Overlook.

The bison (or buffalo) are one of the main draws of Theodore Roosevelt National Park. Whether you visit the North Unit or the South Unit, be sure to capture a photo of one of these majestic creatures.

Take a Hike to a Prairie Dog Town

Prairie dog colonies are referred to as “towns” and this park is full of them. The most accessible ones are located in the South Unit, with several located along the Scenic Loop Drive.

Watch the Sunset at Boicourt Overlook

Dusk is a magical time at the park as the sky is transformed by vibrant oranges, reds and pinks. For the best views of the sunset over the badlands, head to the Boicourt Overlook, located in the South Unit along Scenic Loop Drive.

Head to the Painted Canyon Visitor Center for some incredible views of the rugged landscape. Get here at dawn to really see the canyon walls light up in an array of brilliant colors.

Grab your telescope and head to Theodore Roosevelt National Park for a weekend of stargazing. Held in early September, the Dakota Nights Astronomy Festival is a great way to learn about the stars and galaxies with the help of expert guides.

Hike Through a Petrified Forest

Like Petrified Forest National Park in Arizona, Theodore Roosevelt National Park has its very own petrified forest. It’s a short hike to reach it and well worth it thanks to the stunning scenery.

The Caprock Coulee Trail in the North Unit is just 5 miles long, but it covers an impressive number of habitats, including the badlands, juniper forest and prairie. The southern part of the trail also offers some of the best views in the park.

Snap a Photo of the Unusual Cannonball Concretions

Theodore Roosevelt National Park has some fascinating geological features, but none are more unusual than the cannonball concretions. These are spherical rocks that have formed over time by layers of minerals. The best place to spot them is at the Cannonball Concretions Lookout in the North Unit.

Step Back in Time at Peaceful Valley Ranch

Peaceful Valley Ranch in the South Unit dates to the 1880s and is the last surviving ranch property in the park. While no longer used as a functioning ranch, it is an idyllic piece of history located on the banks of the Little Missouri River.

Paddle Down the Little Missouri River

Grab your canoe or kayak and prepare for an unforgettable adventure as you paddle the Little Missouri River from the South Unit to the North Unit. The journey takes about 5 days and is best done in May or June when river levels are at their highest.

The outstanding Maah Daah Hey Trail, at 144 miles, connects all three units of Theodore Roosevelt National Park as well as the surrounding Little Missouri National Grasslands. The full hike will take at least a week and is only for the most experienced hikers, but there are plenty of access points if you want just a taste.