9 Insta-Worthy Places on the Isle of Skye, Scotland 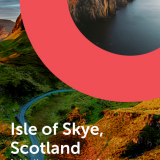 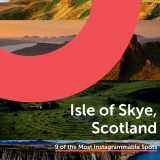 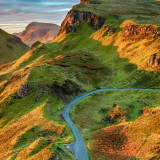 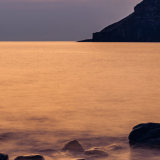 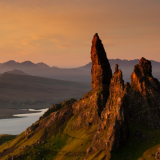 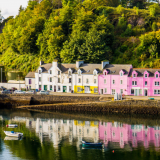 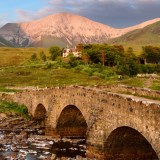 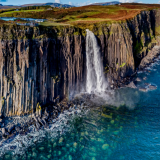 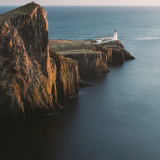 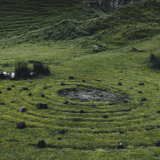 In Scotland’s wild north lies a playground of precipitous terrain peppered with medieval castles, idyllic lochs, and awe-inspiring vistas. Rolling green hills, towering sea cliffs, and jagged ridges are the remains of millions of years of glacial carving. Folklore and mystery have lingered over the largest island in the Inner Hebrides for centuries. A haven for photographers, outdoor enthusiasts, and whiskey drinkers, Skye, Scotland, continually lures travelers with its rugged good looks and far-flung sense of isolation. A wonderland of nature’s most intense landscapes, here are nine incredibly beautiful places on the Isle of Skye, Scotland.

An ode to the relic that is Skye, The Quiraing is the result of ancient landslides dating back as far as the last ice age. The linear peaks and troughs that carry you across the 4-mile long hiking trail reveal a treasure trove of geological masterpieces. The Needle, The Table, and The Prison are all highlights for camera-wielding landscape lovers. The Quiraing is no stranger to the limelight, making its mark on Hollywood in features including Snow White and the Huntsman, Macbeth, The Land That Forgot Time, and King Arthur: Legend of the Sword.

The Old Man of Storr

North of Skye’s capital, Portree, you will find a series of angular basalt formations jutting from the Trotternish ridgeline. Towering 160 feet into the sky, the pinnacle is a tentpole symbolizing the dramatic landscapes of this burly Scottish peninsula. Grassy hillsides interspersed by granite-grey stoney paths fill the 2,300 feet to the Raasay Sound below. While many are happy to snatch a glance of The Old Man of Storr from the road, it’s a sight that begs closer inspection. Take the 2.8-mile hike up the ridge for otherworldly views across the Isles of Rona and Raasay.

Perched at the far end of Isle of Skye’s most westerly point, you will find one of the most resplendent sunset vantage points. Melt into the mood as golden hour drips honey tones across the saw-toothed coastline that ripples into the sea. While many will head to Neist Point for sunset, there’s plenty more to keep photographers engaged any time of the day. Take the 1.3-mile walk to the tip of the peninsula to explore the lighthouse. Or, soak up the views from the grassy slopes that look out over Moonen Bay toward Waterstein Head. Wildlife photographers may also get a glimpse of whales, porpoises, basking sharks, and dolphins as they frolic about in nearby waters.

Nestled deep within rolling pea-green hills and knobbly farmlands, you’ll find a whimsical collection of cone-shaped protrusions and glassy ponds. Like much of the landscape that defines the Isle of Skye, The Fairy Glen was created from historical landslips, leaving behind a smattering of clustered, rocky formations. Don’t be deceived by the name though— there is no link to folklore or faeries in this ethereal terrain. For a little piece of magic, make your way to the top of Castle Ewan, a natural formation resembling ancient ruins.

Folded into the 300-foot high basalt coastline of Skye, Scotland, are columns likened to the pleats of a kilt. Onlookers won’t only be treated to the heritage coast though. Plunging 180-feet into the ocean below, Mealt Falls offer visitors a double whammy when it comes to spectacular sights. On clear days, views can be witnessed across the sea rewarding you with panoramic vistas as far as the Isle of Lewis. Arresting scenery isn’t all to take note of at Kilt Rock. Listen closely and you’ll hear hauntingly beautiful sounds created by wind passing through small holes in the fence along the cliff’s edge.

Home to the nearby whiskey distillery of the same name, Talisker Bay is an enchanting beach set deep between rocky sea cliffs at the foot of Glen Oraid. The emerald sea laps at the shoreline, exposing a narrow strip of coarse shale in its wake. Whether you choose to admire the views with a dram or two, or head out on foot to explore the nearby region including waterfalls and soul-stirring scenery.

Perched beside the blissful waters of the loch, Dunvegan Castle is Scotland’s longest continually inhabited castle. Distinctly different from the rugged terrain that dominates the Isle of Skye, Scotland, the moorlands encircling the castle grounds offer an oasis-like appeal. Woodland glades are complemented by formal gardens and streams gently babble their way to the sea. For an interaction with the neighbors, navigate your way across the loch in a traditional clinker boat to acquaint yourself with the seal colony that lazes across the rocky outcrops.

At the crossroads between Dunvegan and Portree is a stoney bridge at the small settlement of Sligachan. A stunning spot just waiting to be photographed, the river of the same name flows excitedly beneath the bridge as the Red and Black Cuillin and Glen Sligachan provide a sensational backdrop. With rapidly changing weather, the result is often hikes below moody skies and dramatic scenes whatever the season.

Hugging the shores of a secluded bay is a charming seaside town, and the capital of the Isle of Skye, Portree. Surrounded by the craggy hills of Ben Tianavaig, Fingal’s Seat and Ben Chrachaig, this quiet post is the largest town of the Inner Hebridean isle. Home to the majority of the island’s restaurants and cafes, as well as the only secondary school in Skye, Portree’s roots are firmly seeded in its fishing town origins. On a still day, when the water in the bay is smooth as glass, capture the reflections of the brightly-colored cottages that line the water’s edge for the most iconic photo location in this quaint pocket of Skye.

Castles in America: Discover Your Own Fairytale

11 Places That Prove The Faroe Islands are a Nordic Fairytale

Highland Whisky Festival 2019: Sip Your Way Down the Scottish Coast

The Top 10 Most Haunted Places to Visit in the UK

21 of the Most Romantic Lake Resorts Around the World