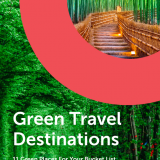 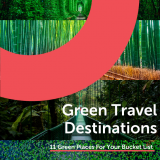 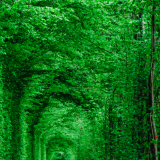 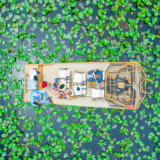 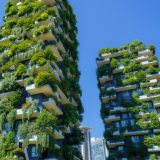 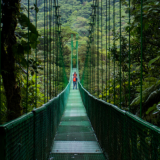 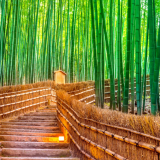 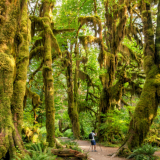 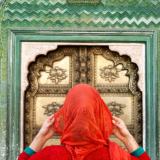 “Are they talking about sustainability or what?”

—Most people, before reading this introduction.

No folks, we’re talking about literally green places— although it makes sense that the two usually go hand-in-hand. From rainforests and misty pine tree-covered wonderlands to emerald-colored palaces and living, breathing skyscrapers, “green travel” brings an impressive amount of beauty. Buckle up and prepare to be green with envy over these 14 incredible green travel destinations:

If you’re a fan of Dr. Seuss, you’re gonna love Colombia’s Valle de Cocora. This whimsical landscape up in the mountains is a fusion of softly rolling hills backed by assertive mountains, all covered by insanely tall and skinny palm trees. At 7 hours away from Medellin, it’s well worth the drive.

900 trees spread across 8,900 square metres of terraces on the buildings of Bosco Verticale make for an immensely unique building complex in Milan. These towering fusions of concrete and vegetation are anything but ordinary, often leading onlookers to point in surprise and say whaaaaat.

Toucans, parrots, monkeys, and more are your neighbors in Costa Rica’s cloud forests, making them everything you’ve ever dreamed of in a rainforest experience. This magical landscape holds 100 species of mammals, 400 birds, and 120 reptile and amphibian species. Oh yeah, and over 2,500 types of plants. It’s the real deal.

Even though Jaipur is known as India’s pink city, there’s one particular destination that’s overflowing with brilliant shades of emerald green. Jaipur’s City Palace has multiple gates that are all gorgeously ornate, and the fourth one is basically Instagram famous by now.

It hardly gets more Australian than the rugged wilderness of the Daintree Rainforest: a Northern Queensland favorite that’s frequented by backpackers and hardcore nature enthusiasts alike. Supposedly, there are about 70 crocodiles lazing around in the Daintree River, so keep your limbs inside the boat should you go on a tour.

Daydreams of Japan often include sights like Arashiyama Bamboo Forest, Kyoto’s most-visited site and one of the best things to do in Japan. Here, verdant groves of bamboo stretch high into the sky in all directions, making it feel like you’re in another world instead of 30 minutes away from a major city. It’s calm as can be and mind-bogglingly beautiful.

What’s more notable than Ella, Sri Lanka itself is the train ride to it, and you’ve likely seen a photo or two of it already because of that. And with good reason, this place is seriously postcard worthy. Nine Arches Bridge (also known as Bridge in the Sky) really makes us want to drop all of our responsibilities for some Sri Lankan vagabonding.

Most folks scratch their head a bit when they first hear there’s a rainforest in the Pacific Northwest of the United States. We can’t blame them; we were hardwired to think rainforests = toucans when we were kids too. Olympic National Park in Washington State is covered in thick moss and low-hanging mist, making it an incredibly unique pick.

The bright green, softly rolling hills of Tuscany are dotted with charming-as-heck Italian towns and plenty of tranquil places to truly relax. Honestly, there’s not much else you could need around here. This rich green valley is perfect for a full on road trip or a getaway from the hustle and bustle of city life.

This abandoned section of industrial railway just outside of Klevan, Ukraine has earned a reputation for being a good luck charm for one’s love life. While we certainly can’t say whether this’ll find you a soulmate or not, we can say that this colorful place is an insanely cool place to take a walk. This plant-made tunnel is worth tacking onto a list for future European travels.

Malaysia’s first UNESCO World Heritage Site happens to be Kinabalu National Park, and it’s pretty freakin’ easy to see why. This 291-square mile park is home to four climatic zones, the world’s 20th largest mountain peak, and some of the richest biodiversity on Earth. It’s impressive, to say the absolute least.

Swamps! Gorillas! Elephants! 10,000 species of tropical plants (some of which could probably kill you)! This rainforest is hardcore. At 500 million acres of land, the Congo Rainforest is bigger than Alaska, holding the title for the world’s second largest rainforest. Green is pretty much the only color you’ll see around here.

Mangroves and marshes kind of sounds like a cool band name, but we’ll leave ‘em to Florida’s Everglades National Park until further notice. This subtropical splendor looks like it could be a part of the Amazon, with lush vegetation sprawling across plentiful waterways. Alligators and crocodiles coexist in these massive wetlands, along with tons of other species both above and below water. It’s as Florida as can be.

Last could not be farther from the least—you didn’t think we’d leave out the Amazon, did you!? That would be absolutely unhinged. It’s essentially the mother of this entire list, stretching across 9 countries: Brazil, Bolivia, Peru, Ecuador, Colombia, Venezuela, Guyana, Suriname, and French Guiana. Needless to say, you’re gonna have a hell of a time picking which country you want to experience it from, which is why you should probably check ‘em all out.

Bird's Eye View: 23 of the Best Aerial Views in the World