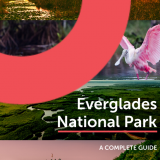 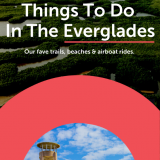 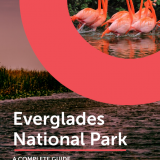 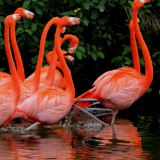 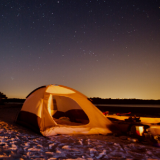 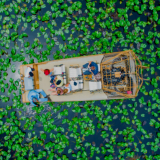 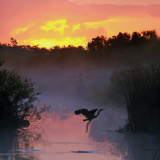 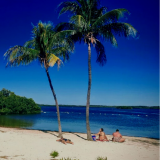 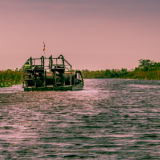 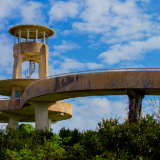 Sawgrass, cypress hammocks, sloshing swamps, and waxy mangroves— that’s the patchwork of Everglades National Park. It all rolls out for as far as the eye can see, capping the southern tip of the Sunshine State with what’s now the largest protected wilderness east of the Mississippi River. What the Everglades lack in soaring mountain summits, they more than make up for in biodiversity, boardwalk hikes and birdsong. Everything from turtle-spotting safaris to scuba dives in Biscayne Bay is on the menu at this unique national park – just watch out for the gators!

Everglades National Park was designated back in 1947. The preserve was intended to protect the last remaining swathes of Florida’s great southern wetlands. These were lands once roamed by Seminole Indians and saber-toothed cats, but suddenly endangered by human encroachment and industrialization. Today, the ecosystem ranges from the end of the Kissimmee River to the keys of Florida Bay, and is a UNESCO biosphere visited by an estimated one million people each year.

Where is Everglades National Park?

Everglades National Park occupies the southern tip of Florida. You’ll need to go beyond the rattling rollercoasters of Orlando and the coral-colored beaches of Clearwater, further down to where the Sunshine State slips into the Gulf of Mexico. That’s where you’ll find the 1.5 million acres of reserve, wedged between Miami (Everglades after party, anyone?) in the east and chic Naples in the west.

You might have heard Everglades National Park being referred to as the River of Grass. It’s a nickname that was given to the region in the 1940s and highlights just how vast the plains of sawgrass prairie within the preserve really are— in fact, they are the largest of their kind in all of North America! And there are more superlatives than that: the Everglades have the largest stretches of mangrove on the continent, they reign as one of the largest wetlands in the whole world, and they are the only place where American gators and crocs share a habitat.

There’s really one main rule when it comes to choosing when you’ll hit the Everglades: dodge the insects. Well, that and the hurricanes! Generally speaking, bugs and big Atlantic weather systems come with the Florida wet season. That runs in line with the summertime and the start of Fall. So, you’ll see most people planning a tropical safari to this US national park in the winter. Not only is it warm and dry, but receding water levels reveal sawgrass plains and bring impressive migratory birds in from the north.

The park itself is always open. No matter the season, no matter the weather, you should find that there’s always access to the vine-strewn cypress hammocks and sawgrass plains. You should be aware that the Ernest F. Coe Visitor Center, located in Homestead on the eastern fringes of the park, is only open from 9am to 5pm in the wet season, and from 8am to 5pm in the dry season.  Everglades National Park is currently under limited operations due to COVID-19. Some facilities may not be available and staffing may be limited.

You won’t have to fork out too much to get your glimpse of primordial alligators and elegant snow geese. It’s just $40 for a full year’s Everglades National Park pass. Alternatively, you can purchase week-long passes for $20 per vehicle, $15 for a bike, and $8 for an individual on foot. The Everglades also run an e-ticket system, so you can store the whole shebang on a smartphone – you know, where the crocs can’t chew them!

This might be one of the biggest wildernesses in the USA, but it’s actually pretty easy to reach. For starters, there are countless major airports in the vicinity. To the east is Miami International, with long-haul and short-haul links going all around the country. From the terminals there, it’s about 50 minutes in the car to the eastern gate in Homestead. Fort Lauderdale/Hollywood Airport also isn’t far – expect around an hour’s drive from terminal to cypress trees.

Drivers can make use of the main I-75 or I-95 highways that cut through Florida. Both will take you to Miami, which is right on the doorstep of the park. Highway 41 is worth knowing, too, because it cuts between the Everglades park and the beautiful Big Cypress National Preserve a little to the north.

Planning a night under the stars? Here are some of the best campgrounds and campsites inside and outside of Everglades National Park:

If camping isn’t your thing, there are plenty of resorts, hotels, hostels, inns, cabins and B&Bs within a quick drive of Everglades National Park. Here are some of our favorites:

It’s impossible to score an Airbnb inside the boundaries of the Everglades National Park. After all, you can hardly build condos smack bang in the middle of an alligator-infested swamp, right? Your best bet is to focus on the areas just outside the eastern boundaries. We’re talking the outskirts of Miami, towns like Homestead, and suburbs like Kendall. They have loads of Florida-style apartments, and even a few with pools thrown in for good measure. On the west side of the Cypress Reserve, a tad further from the Everglades, is Marco Island. You can go there to find sea-view condos gazing over the quartz sand of the gulf coast.

If there’s one sort of tour that the Everglades National Park is known for, it’s got to be those adrenaline-pumping airboats! These whizzing vessels can take you on a high-octane trip through the sawgrass swamps to spot gators and stalking waterfowl. Less heart-thumping are the day-long kayak safaris and the birding trails, which make use of the miles of boardwalk paths that weave throughout the reserve. Lovers of marine animals might prefer to stick to the coast, where boat tours can help you spot dolphins and manatees and more in the glistening waters of the Mexican Gulf.

Shark Valley is a natural cut-out of the Everglades National Park that counts some of the most iconic stretches of sawgrass prairie in the region. It’s a favorite stop on many an Everglades tour, mainly for the soaring Shark Valley Observation Tower that offers sweeping panoramas of the grasses and the swamps all around. It’s also a birding haven. Just keep the camera at the ready for any passing spoonbills and storks!

Every trip to the Everglades National Park should start at the fun and informative Everglades National Park Visitor Center. It sits in Homestead near the eastern gate, offering an intro into the unique natural and human history of the wetlands. You’ll learn all about the cultures of the native peoples who inhabited the glades and get a feel for the booming biodiversity that awaits deeper in the park.

Short but packed with wildlife, the Anhinga Trail is under one mile of Everglades wilderness. It starts at the Royal Palm Visitor Centre and runs across creaking boardwalks, through reeds, sawgrasses, and sloshing water channels. Sometimes, you’ll see more alligators than you can shake a juicy steak at – but it’s probably not a good idea to do that! In addition, there are all sorts of insects, sub-tropical birds, and curious flora to witness.

Best Things to Do in Everglades National Park

Dive down into the John Pennekamp Coral Reef State Park

Kayak in the mangroves of the Ten Thousand Islands

Walk the trail in Shark Valley

Go on a high-speed airboat tour

See gators on the Anhinga Trail

Adventures by sea in Cape Sable

Go for hikes in the Big Cypress National Preserve