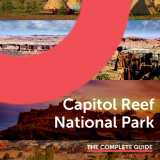 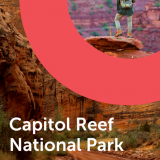 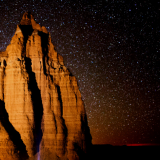 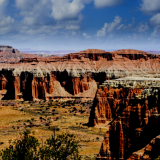 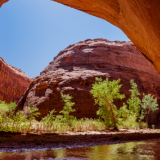 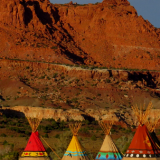 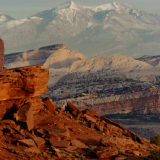 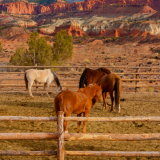 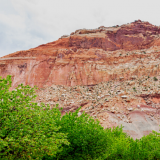 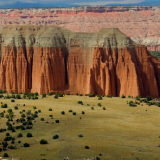 The name Capitol Reef evokes images of tropical coastlines and marine life, which may seem odd for the name of a national park smack dab in the middle of landlocked Utah. Early settlers thought the park’s seemingly impenetrable 87-mile long wrinkle in the Earth’s crust looked like a “reef,” and that its giant white Navajo Sandstone domes looked just like the dome of the Capitol building in Washington D.C. – hence its name, Capitol Reef.

Visitors are often lured to the big name national parks in Utah like Arches National Park and Zion National Park, but visitors willing to venture into this remote part of the state will find an amazing wonderland of unique rock formations, dizzying slot canyons, ancient petroglyphs, and lush fruits orchards, without the crowds of Utah’s more-famous parks.

Where is Capitol Reef National Park?

Originally named “Wayne Wonderland” in the 1920s by local businessmen who lobbied President Roosevelt for protection of this colorful land of buttes, domes, and canyons, Capitol Reef National Park was designated a national monument in 1937 and eventually a national park in 1971. You’ll find plenty of human presence in the park from the Freemont Culture Indians who lived in the area from 700 to 1,000 years ago and left behind a diversity of rock art images and ancient habitation sites to the Mormon pioneers who made this tiny, remote river valley their home in the late-1800s.

Due to its higher elevation, summers in Capitol Reef National Park are not as harsh as many of the other southwestern parks. Summer temperatures can be uncomfortably hot on the trail though so hit the trail early in the morning to avoid the midday sun. Flash floods are a risk in late summer and roads occasionally close to snow in winter. Fall is the best time to visit the orchards and the annual harvest festival typically takes place the third weekend in September.

Capitol Reef National Park is open year-round, 24 hours a day, although some roads may close due to snowy conditions or flash flood warnings. The visitor center is open daily from 8:00 am to 4:30 pm, except for major holidays. Visitor center hours are extended to 6:00 pm during the summer. The Gifford House, famous for its pie, opens for the season appropriately on Pi Day (March 14) and closes around the end of October and is open daily from 8:00 am to 5:00 pm. Capitol Reef National Park is under limited operations due to COVID-19. Some facilities may not be available and staffing may be limited.

Entrance into the park costs $20 per vehicle or $10 per individual on foot or bike and passes are valid for 7 days. Holders of the America the Beautiful National Parks and Federal Recreational Lands Pass enjoy free entry into the park. Sites at the Fruita Campground are $20 a night and campsites at the more primitive Cathedral Valley Campground and Cedar Mesa Campground are free.

Getting To Capitol Reef National Park

From Bryce Canyon National Park, take Scenic Byway 12 through Grand Staircase-Escalante National Monument to its intersection with Utah 24 at the town of Torrey. Head east on Utah 24 and you’ll arrive at the park. From the east, take I-70 to the exit for Utah 24 and head west until you enter the park.

There are no Airbnbs within the borders of Capitol Reef National Park. Camping is the only option for lodging in the park. The small gateway town of Torrey is just 15 minutes west of the visitor center and that’s where you’ll find a variety of lodging options including Airbnbs. Torrey Airbnb options range from private rooms and tiny cabins to luxury homes and desert retreats.

Planning a night under the stars? Here are some of the best campgrounds and campsites inside and outside of Capitol Reef National Park:

If camping isn’t your thing, there are plenty of resorts, hotels, hostels, inns, cabins and B&Bs within a quick drive of Capitol Reef. Here are some of our favorites:

One of the most exhilarating ways to explore Capitol Reef National Park is with a guided canyoneering tour. Canyoneering involves climbing, rappelling, and squeezing through narrow and twisty slot canyons and there are canyons for all skill levels and abilities. For first timers, we like Capitol Reef Adventure Company.

If you only have a few hours, driving the Capitol Gorge Road will give you the most bang for your buck. Start at the visitor center for a quick primer on the unique geology of the area and then head out on the 25-mile roundtrip scenic drive stopping for a quick hike up Grand Wash and a wander through the orchards in Fruita. The Capitol Gorge Road begins at the end of the paved scenic drive and offers some of the best scenery in the park.

The Mormons settled near Capitol Reef in 1880 and planted orchards along the Fremont River. The park’s last remaining resident sold his house to the National Park Service in 1969 and it has since become a monument to the area’s Mormon homesteading days. Park visitors can tour the Gifford Homestead, purchase freshly baked pie and bread from the store, and enjoy a picnic under the fruit trees.

The Goosenecks Overlook is a short and easy hike just off Utah 24 with amazing views into Sulphur Creek Canyon. The trail offers sweeping views of the Waterpocket Fold and dome formations and is especially dramatic at sunset. The Sunset Point Trail also begins from the Goosenecks Overlook parking area and follows the rim to a viewpoint perched on the edge of a cliff.

In Capitol Reef National Park, skies are blue and beautiful hikes are plentiful. If you’re ready to stretch your legs (but not sure where to start), here’s a list of 10 of our favorite hiking trails in Capitol Reef:

Things to Do in Capitol Reef

Pick your own apples, cherries, peaches, and plums in the park’s historic orchards

Mountain Bike to the remote and seldom visited Cathedral Valley

Watch for deer, marmot, and antelope that frequent the Fruita orchards

Cool off in the water along Sulfur Creek Canyon

Spy names of pioneers carved into the walls in Capitol Gorge, also known as the Pioneer Register hike

Best National Parks in Canada for the Nature Enthusiast

The World's Most Epic Trails for the Thrill Seeker

Mountain Peaks That (Nearly) Anyone Can Conquer