A Guide to Caminito del Rey: the One of the Most Dangerous Hikes in the World 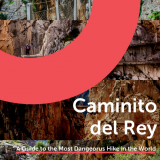 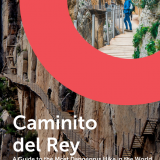 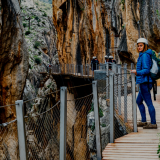 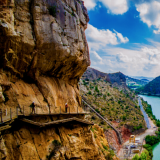 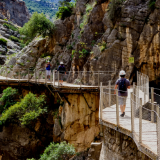 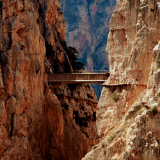 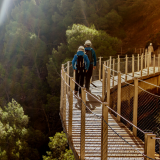 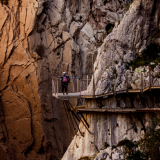 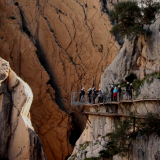 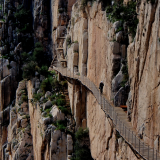 Nicknamed the “Walkway of Death” by intrepid rock climbers for decades, Spain’s most thrilling walk, the infamous El Caminito del Rey, is one of the most dangerous hikes in the world. This suspended walkway stands over 300 feet above the spectacular El Chorro Gorge. It hugs the dramatic rock face pretty much the way I did when I visited, as if my life depended on it.

This off-the-beaten-path trek is perfect for those who love a little thrill and a lot of awesome landscape photography. In one of Spain’s most outlandishly beautiful regions, this lesser-known (and utterly crazy) hike is one of the most thrilling things to do in Spain. Here’s the scoop:

The King’s Walkway (as the name translates) stretches between the towns of El Chorro and Ardales in the southern Spanish province of Malaga. This region is defined by its dramatic gorges, some of which you drive through on a perfectly tarred road and some, like the famed El Chorro Gorge, that you must sweat through on a walking trail instead.

The trail was originally constructed over 100 years ago when the aqueduct and several dams were built on the Guadalhorce River and an ‘easy way to transport goods and workers’ was needed. It was an insane feat of engineering. By all accounts, the project was risky AF, and rumour has it that although local sailors from Malaga were employed to do the rope-swinging work (guess they weren’t afraid of heights!), the most dangerous work was carried out by convicts condemned to the garotte.

Officially opened by King Alfonso XIII in 1921— a pompous event that led to the walkway’s modern name— the El Caminito del Rey was left to degrade terribly over the years after its use became redundant. The concrete slabs fell right off, leaving the exposed metal rods as the only way to get across.

And that’s when the crazy rock climbers figured out that it was one of the world’s most dangerous hikes. After one too many accidental tumbles, the Spanish government finally closed the path and forbid entry to anyone. Until it was refreshed and reopened, the Caminito del Rey had been off limits for a decade and a half.

The logistics of tackling the Caminito del Rey

Who can complete the walk? Restrictions on the Caminito del Rey prevent children under 8 from doing the hike, and that’s probably a good idea. Other than that, you don’t really need to be an athlete or acrobat to complete the walk safely; a healthy state of fitness is enough to bag this bad boy.

Where can I buy tickets for Caminito del Rey? The best option is to buy your tickets from the official Caminito del Rey Website, but that requires some pre-planning given that tickets usually sell out a couple of months in advance. Yet this is one of Spain’s lesser-known gems and quite a few visitors discover this walk only once they are already in the country with just a few weeks to spare. Don’t fret: there’s a way you can score last-minute tickets and I’ll detail all below.

How much do Caminito del Rey tickets cost? Entry tickets for this dangerous hike cost just 10 Euros— this is seriously one of Europe’s best bargain adventures! If planning ahead and coming by train, note that there’s a great ‘combined’ ticket that offers train, entry to the El Caminito del Rey, and shuttle bus. The official RENFE website is only in Spanish, but Google Translate ought to help you figure it all out.

Are visits time limited? Entrance tickets are sold in 15-minute time slots. However, once you’re actually in, you can take all the time in the world to complete the walk. This is simply a way to stagger walkers and prevent a bottleneck of walkers at the entrance booth at 8am.

How long is the walk? All the way up, it takes most people 3-4 hours to complete the 2-mile walk, and more if you take a lot of photos and snack breaks (which you probably will). The scenery is simply out of this world and you’ll no doubt want to take your time soaking it all up.

What should I pack? We took a packed lunch of chorizo, goat cheese, and sourdough bread with us, plenty of water, and a tub of sunscreen. Even if you’re among the first to enter in the morning, you’ll be tackling the last section under the scorching midday sun in summer, so make sure you have plenty of supplies to keep you going. Strangely enough, the official website says you can’t take a backpack along: not only did we see everyone with backpacks, but no mention of that was made at the entrance, so trust that you’ll be all good. There are plenty of spots where the trail passes through open plateaus and you’ll find benches and sweet grassy spots to rest your rump along the way.

Is it the Caminito del Rey walk actually safe? Had we been in Australia, this suspended walkway would be caged in entirely, preventing people from jumping intentionally. Not so in Spain. The walkway is about 3-feet wide with a waist-high railing. You’re given a sexy white helmet at the entrance (although not sure how much that would help with a 300-foot fall) and told to stick to the mountain wall. The Caminito del Rey is no longer the death-defying challenge it once was, but it’s still widely regarded as one of the most dangerous hikes in the world. There are plenty of hairy moments where you may just grip that railing a little too hard. Just sayin’.

Can the walk be taken in either direction? Nope, this is a one-way street, baby! The walk starts in Ardales and ends in El Chorro at the Caminito del Rey Salida Sur.

How can you reach it? There are parking lots at both ends of the walk and public transport options on both sides. Read on to get the insider’s goss on how to best tackle this beast, and basically do the opposite of what we did–learn from our mistakes!

What’s the best way to walk the Caminito del Rey?

Here’s a quick recap of the infrastructure on the Caminito del Rey that’ll help you map out your visit:

Northern Entrance (Ardales): parking lots, start of the walk via one of two tunnels, entrance booth, and shuttle bus that connects with the southern exit

Southern Exit (El Chorro): parking lots, yummy ice-cream stand (oh yeah, you need to know this spot), shuttle bus that connects with southern exit, AND train station connecting walkers to Malaga, Seville, and Ronda, and from there, every other corner of Spain.

If coming by car: whether you’re like us and vanlifing around Europe or simply plan to get here by rental car, you’ll probably join the 99% crowd and plan to park at the northern entrance to take your walk and then simply take the shuttle bus at the southern exit to return to your car.

If coming by train: The Caminito del Rey train station in El Chorro will see you take on my cunning plan by default so hey, lucky you ?

Pro tip: If you are visiting Caminito del Rey via car, here’s the best way to park while avoiding traffic and lines. Get the shuttle-bus ordeal over and done with in the morning, as most sheep people will follow the above, leaving morning bus queues delightfully short. Drive and park at the southern exit instead, take the shuttle-bus from this spot, start your walk from the northern end, and then, voila: by the time you finish the exhausting endeavour, your precious, comfortable, and air-conditioned car will be waiting for you. No queues, no bus, no time wasting!

How to score last-minute tickets for the Caminito del Rey

Bagging your tickets ahead of time online is the way to go, yet there is a way to score tickets on the day. Here’s a little-known fact: every morning at 8am, the ticket office at the entrance booth releases a certain number of last-minute tickets. Usually, there can be anywhere between 30 and 100 tickets depending on how many have been pre-sold for the day.

The catch? You need to be at the entrance booth by 7:30am at the latest to join the short queue. Once you’re through, you’ll get your ticket with immediate entry so you’re good to go! Just remember that you will have to park in Ardales and you will have to contend with those long shuttle-bus queues. But if the option is either this or no Caminito del Rey at all, well, it’s a no brainer!

Where does the walk start?

The entrance booth for the Caminito del Rey is actually built along a hiking trail (you can’t drive up to it) and there are two ways to reach it from the main road that passes through Ardales.

The long way (1-hour walk):Take the tunnel next to the Kiosko Restaurante and follow the trail alongside a glorious river. The walk is indeed quite lovely, but seriously, does anyone need to add another hour of walking to the Caminito? Probably not!

The short way (15 minutes):A shorter trail starts with a creepy tunnel at the Entrada Pasarella Norte, about 300m north of El Kiosko. The ticket booth is just one mile from here.

40 of the Best Things To Do in Spain

27 of the Best Things to Do in Barcelona

The Best Cities in Spain for a Romantic Getaway

The Best Beaches in Spain for Every Type of Traveler

4 of the Best Things to Do in La Rioja, Spain